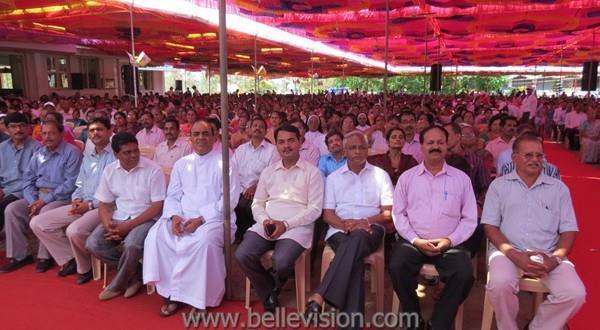 Most of the speakers urged the participants to strengthen the community bond by actively participate in politics; join administrative services and corporate sectors.

All India Catholic Union (AICU) president Eugene Gonsalves in his inaugural address said, ‘The huge turnout today is a manifestation of faith. Catholic Sabha of Mangalore Pradesh is one among the top 5 units in the country,’ said Gonsalves.

Elaborating on activities of AICU, Gonsalves said, ‘To promote economic, administrative, social and political awareness among the Catholics, AICU was formed as an apex body of the laity. It will complete 100 years of existence soon. It works actively all over the country with an aim to safeguard the interest of the community,’ said Gonsalves.

Stressing that more number of Catholics should get into politics, administrative and corporate sectors, Gonsalves said, ‘Its these sectors that rule the country. Start your own businessbusiness. Government has various schemes for minorities. The Catholic Sabha should engage in creating awareness about these issues. There is free coaching available for civil service exams. If there is good representation in all these streams, the Catholic community will flourish,’ said Gonsalves.

Speaking on the occasion, Mangalore diocesan political awareness Committee convener M P Noronha said, ‘The huge turnout for this convention is a testimony to the fact that we all are united. But we need to strengthen further. A lot of good has been done to the society through Catholic Sabha. Whenever there was any atrocity against Christians, the organization has brought people together to protest against it,’ said Noronha.

Noronha said Catholic Sabha was formed in 1977 when the Tyagi Report favoured the imprisonment of those who were involved in the act of conversion. This resulted in protests, agitations and the enactment of this report was stalled.

‘In India, people have bad opinion about conversion and Christians. However, people who criticize it should also be aware that a lot of such conversions take place across the globe. There are hundreds of people who have converted from Christianity to other faiths in the western countries, and none talks about it. The yeoman service of Christian community is sidelined and the tag of conversion is hyped all around.

We have hundreds of institutions, but have failed to make any influence. It is like having flower without fragrance. We should not keep quiet whenever there is any atrocity against us. We have been afraid to fight back. Let us come out of the party culture and work for the community,’ said Noronha.

‘There is a need to bridge the gap between the laity and the clergy. Christians in Dakshina Kannada district account for 15 percent of total population, but there are only a few leaders in the political stream,’ said Noronha.

Bishop Dr Aloysius Paul D’Souza launched newly-formed Mangalore Christian Minority Women’s Multi-purpose Development Cell on the same occasion. The cell has been formed with the intention to strengthen and work for the empowerment of women.

Joseph Crasta of Snehalaya Ashram, Talapady and Corrine Rasquinha of White Doves were felicitated for their humanitarian service towards downtrodden and poor. Besides, scholarships were distributed to students to support their education.

Earlier, thousands of people took part in a procession from Tokkottu railway bridge to the parish grounds.

Thanksgiving Mass was offered at the parish as part of the convention.