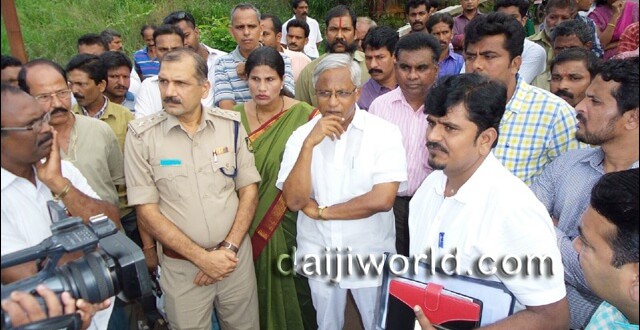 Mangaluru, Sep 24: In the wake of the recent fatal accident at Padil junction and repeated complaints from the public, Mangaluru south MLA J R Lobo along with national highway authority of India (NHAI) and city corporation officials inspected the area on Thursday September 24 and said steps will be taken to provide solution for the problem.

After inspecting the junction and holding discussions with officials, MLA spoke to media persons and said,”This junction in Padil has been constructed unscientifically, As a result many accidents have taken place here in the recent past. In this regard I have visited here and after inspecting this spot, I have directed the NHAI officials to make certain changes by removing 3 islands. I have also directed the corporation officials to shift the bus stand and place speed breakers here. I have asked the officials to make these changes within a week.”

Lobo also inspected the ongoing work at Padil railway overbridge and the construction of slabs and bridge across a storm water drain which flows near Pumpwell. After inspecting the work, he directed the officials to complete the work by the end of November including the bus bay work.