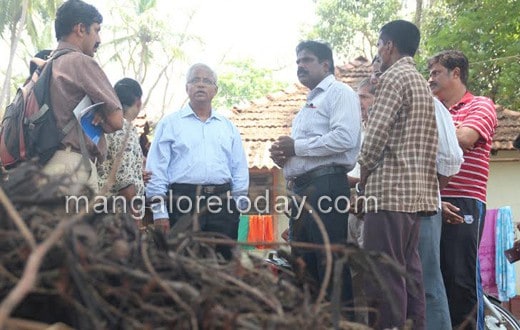 Mangaluru, April 27, 2015: Mangaluru South MLA JR Lobo who inspected the Gujjarakere lake development works along with officials on April 26, Sunday, later spoke to reporters and informed that a sum of Rs one crore has been released by the Minor Irrigation Department for the works.

“Initially it was thought that the desilting of the lake would be an easy task. But now we are realising the real problem. So far we have failed to judge the quantity of the silt in the lake. Already huge quantity of silt has been removed from the lake since three weeks.” Lobo said adding the untimely rains had hampered the work. The lake is nearly 20 to 30 feet deep and it is difficult to remove all the silt unless the water is emptied.

The dredging machinery will arrive in a couple of days to facilitate and speed up the work, he informed.

On this occasion, Lobo also directed the officials to complete the works in a month’s time.

Following complaints from locals that drainage water is entering the lake, the MLA assured to make alternate arrangements once the first phase works are complete.