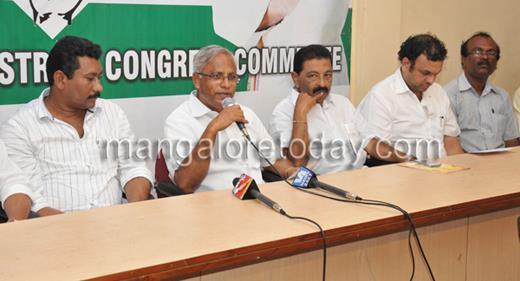 Mangalore, Feb 5, 2014 : JR Lobo, MLA of Mangalore South Constituency has informed that a sum of nearly Rs 350 crores has already been sanctioned for various projects relating to drinking water, roads, underground drainage and solid waste management in the city.

Addressing the media at the DK District Congress office here on February 5, Wednesday, Lobo presented a report on the progress works initiated in his constituency during the last eight month period of his term as MLA.

Referring to the proposal to develop markets in the city, MLA Lobo said the blue prints and project reports pertaining to the reconstruction of the Central Market have already been prepared. He also informed that the markets at Kankanady, Kadri and Urvastores will also be developed.

Stressing the need for a growing city of Mangalore to have enough lung space, Lobo also said the famous Kadri Park in Mangalore and the Mathias Park at Falnir will be developed and added Rs 25 lakhs has been sanctioned for the purpose.

Health centres will also come up at seven places including Jeppu, Ekkur, Padil, Shaktinagar and other places, the MLA said adding the Union Government aided projects have been approved and will come up at an estimated cost of Rs 3.06 crores.

He said the MCC   had to pay Rs 10 crore to the Railways as its share towards the construction of the much demanded under passes at Mahakalipadpu, Jeppu Kudupady and Padil Bajal.

Lobo also spoke about the proposals made to open night collage at Karnataka Polytechnic and to introduce metro rail on Konaje-Udupi Manipal route.