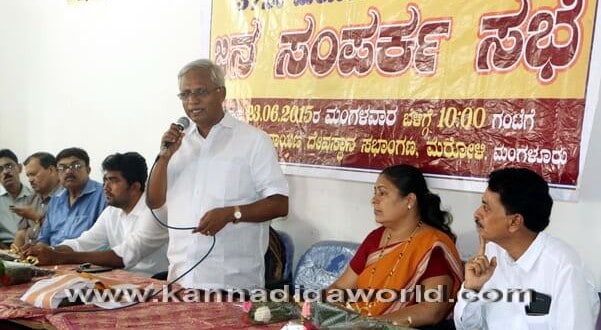 Image from post regarding MLA JR Lobo addresses to the grievances of citizens in public meet.

MLA JR Lobo addresses to the grievances of citizens in public meet.

Mangaluru, June 23: MLA JR Lobo chaired a public grievances meeting with the officials of various department at the hall of the Shree Sooryanarayana Temple in Maroli here.

MLA JR Lobo accepted the applications from about 100 people and responded to their concerns in the meeting organized along with the Mangalore City Corporation Mayor, deputy mayor, corporator, and important officials.

Among the applications, contaminated drinking water, inappropriate drainage systems, roads and power cut and other concerns were placed before the MLA. The MLA thoroughly looked into each application and directed the concerned officials to resolve the problems on spot.

Speaking later, MLA said, this region comprises of hills, due to which it is difficult to provide all the basic facilities to the local residents. Already in two years, Rs 1 crore has been sanctioned for various developmental works from the MLA’s fund and some projects are under progress. As water is directly supplied from Tumbe dam to this area, the percentage of contamination will be more. Hence measures will be taken in coming days, to supply pure water to this area from GLSR tank in Paidl. The drainage problem of this area will be added under the ADB-11 project, said MLA JR Lobo.

In this meet, 16 beneficiaries were given the ‘Sanction order letter’ of pension scheme.