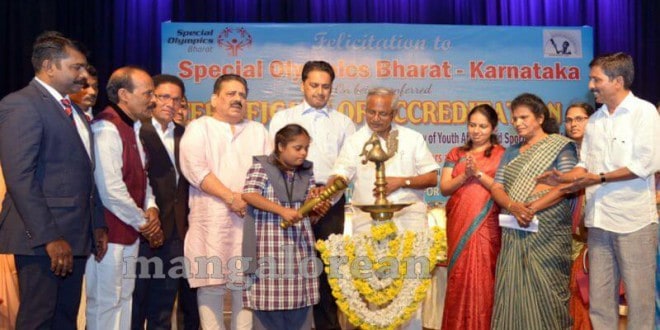 MLA J R Lobo inaugurated the programme by lighting the traditional lamp along with other dignitaries. Speaking on this occasion, Lobo said, “It gives us immense pleasure to organize anything for the specially abled children. I thank the various organizations that are involved helping out these children without any expectation of publicity.”

The accreditation certificate was given to Vasanth Kumar Shetty, the newly appointed area director. National Awardee, Archana was felicitated by Deputy Commissioner A B Ibrahim for her achievement in swimming. Ibrahim said, “It is really very important to involve special children in sports and other activities. When they take part in such activities, they will grow mentally.” He congratulated Saanidhya for organizing various events for the specially abled children.

Ibrahim said, “It is very important to acquire resources from the government by approaching the state and central government from time to time. This will make them to prepare adequate budgetary plans.”