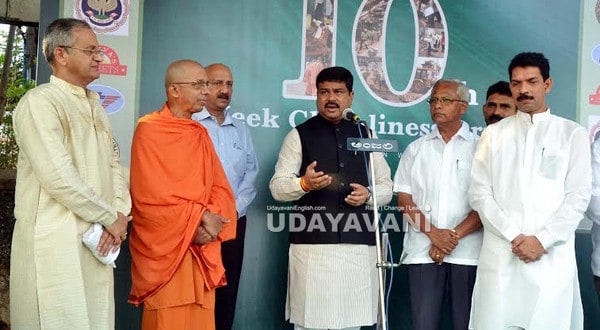 Minister Pradhan lauded the efforts of Mangaloreans in their contribution towards the nation. He also opined that Swacch Bharath Abhiyan should become a mass movement to ensure a clean and green nation. Pradhan appreciated the initiative of Ramakrishna Mission in this regard and asked people to join hands.

A bus stand was renovated opposite Kadri Police Station. The low areas in the bus stand were filled up and the seats were fixed. Team isiri Art gave a new look to the bus stop with their unique painting. Damaged vehicles near the police station were vacated and the space was cleaned to facilitate parking for the public. Circuit house premises were cleaned up. Used and damaged bottles were recovered and disposed.

The students of Government First Grade College, Car Street, employees of MRPL, members of Institute of Chartered Accountants of India, VV Cricket Association and isiri Arts and devotees of the Math took an active part in the drive.