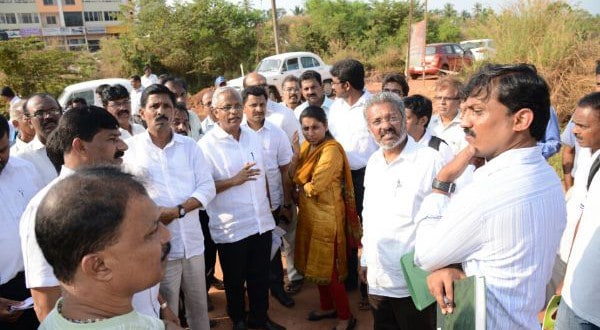 The MCC Commissioner with MLA J R Lobo and Mayor Mahabala Marla, went around the place and checked the place and discussed various plans and hurdles with expert architects. She studied the blueprint of the new bus stand.

The suggestions were made to build a 3-4 floor bus stand-cum-commercial complex for buses at Pumpwell.

As per the plan, priority will be given for the better management of movement of the vehicles. Currently 525 buses are making daily 2500 trips in the state bank based bus stand. A suggestion was made that all the floors should have access to service road of the National highway. Beautification of canal was also discussed.

MLA J R Lobo suggested that three should be three floors for the buses and top floor for parking facility for private vehicles.

Speaking to the press MLA J R Lobo said, “It is a long dream to have the bus stand at Pumpwell. The land was acquired five years back. We have a total of 7.28 acres land acquired by the MCC. 5 acres of land is useful to build the bus stand while the rest 2.5 acres fall under the hill and canal. The canal is a challenge for us. We need the government grants, along with the loan from government. There will be no more land acquisition. we hope that within two years, we will get the full-fledged bus stand for Mangaluru.”

Mayor Mahabala Marla said, “We need to get the permission from National Highways Authority of India.As soon as we get the nod, we will start the work. There will be no shortage of funds as the state government is ready to grant the money and in the available space, we will build the best stand as soon as possible with everyone’s co-operation.”

Commissioner Hephsiba Rani Korlapati said “It has been already five years after acquiring the land, Our aim is to have a proper concept plan as to what work we can do in the coming days before the republic day. As part of that, we have come here to check the ground situation. This is a tri-junction state level transport centre, we also have to look into making the place as inter-state transport facility. The MCC is ready to render all the support and the work has already begun from today.”