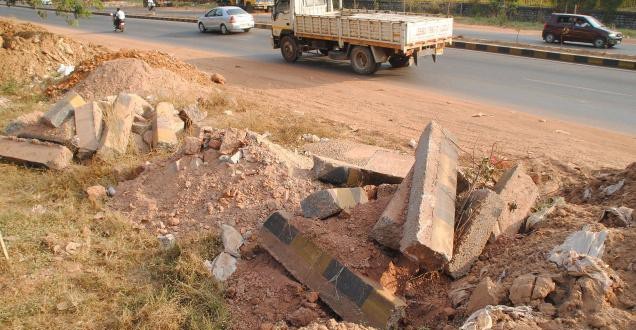 Early on Monday morning, the city corporation started clearing out tonnes of construction debris that had been piled along stretches of city roads.

Launching the campaign by getting earthmovers to clear out the debris in front of the Police Commissioner’s office and by the railway crossing at Pandeshwar, Mangalore City South MLA J.R. Lobo said that over the next 15 days officials of the Mangalore City Corporation would clear out piles of debris and garbage seen around the city.

“The Deputy Commissioner and the MCC are taking up the matter of dumping and the possibility of penalising builders who dump debris,” he said.

Consenting that the problem arose because of a lack of dumping grounds in and around the city, Mr. Lobo said: “But, builders should not be dumping their refuse by the road. The corporation is in the process of identifying around three spots on the outskirts of the city where the debris can be dumped.”

The MLA called for stringent implementation of the anti-littering and anti-spitting sections of the Karnataka Municipals (Amendment) Act, 2013.

On door-to-door collection of garbage in the city, which so far has received little success, the MLA said the tender for its collection was “in the final stages”. “It will be implemented across the city soon,” he said.

He believed, if segregation was achieved, the landfill and composting plant at Pachanady would be far more effective than it was now.