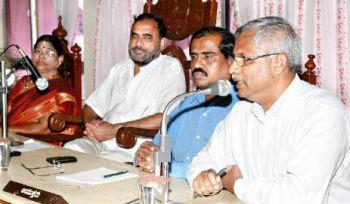 Image from Post Regarding Mayor chairs meet on KUDCEMP works

MANGALORE: Mayor M. Shankar Bhat has said that the council of the Mangalore City Corporation (MCC) will take a decision on how to connect underground drainage (UGD) pipelines and water supply pipelines to each house and to commercial establishments at its next general body meeting.

Mr. Bhat was speaking at a special meeting convened on Wednesday to discuss the progress of various works under the Karnataka Urban Development and Coastal Environmental Management Project (KUDCEMP) funded by the Asian Development Bank (ADB). Earlier, J.R. Lobo, Deputy Project Director, KUDCEMP, suggested that councillors frame a policy on connecting UGD lines and water supply lines to individual houses and establishments. He said that the MCC would have to take a decision in this regard at the earliest. This was because work on the sewage treatment plants at Kavoor and Pachhanady had been completed. If they had to be operated to their full capacity on a trial basis, sewage had to be pumped to the plants, he said. In addition, two more plants would be set up at Jeppinamogaru and Surathkal.

The Mayor said that the council would decide on issues such as whether the MCC or the owners of the buildings would connect the UGD lines and water supply lines to the buildings.

The Mayor said that the council would also have to take a decision on replacing all UGD lines in the old Mangalore area with new ones. Areas such as Barke, Pandeshwar, Bunder, Bolar, Kodialguttu were facing problems such as sewage flowing out of manholes and damage to the pipelines.