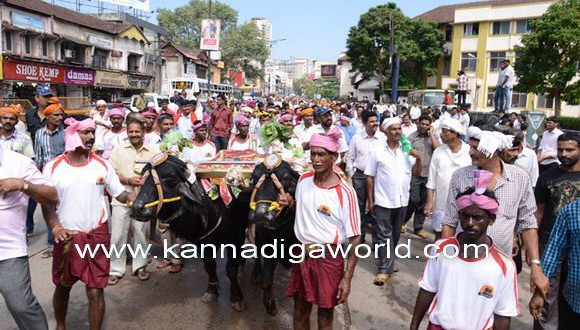 Image from Post Regarding Massive protest in Mangaluru over ban on traditional Kambala sport.

Massive protest in Mangaluru over ban on traditional Kambala sport.

The rally began from Shanti Nilaya ground at Balmatta and culminated at DC’s office. Along with protestors, nearly 190 pairs of specially decorated buffaloes were also a part of the protest march and a protest was held in front of the DC’s office.

Bhaskar Shetty, President of one of the Kambala committees addressed the protestors and spoke on the importance and significance of Kambala as a traditional rural sport of Dakshina Kannada and Udupi districts. He alleged that the animal husbandry and veterinary sciences department had misinformed the Supreme Court about the sport. He also said the buffaloes are taken care of very well by the owners.

He also urged the state government as well as elected representatives and ministers from the coastal districts to urge the union government to intervene in the matter.He warned that the protests would be intensified if the ban order was not withdrawn.

The farmers also emphasised that, Kambala is the only means of entertainment for the rural population. They also said that the buffaloes running the Kambala races are taken care like their own children and there is no question of cruelty at all.

Deviprasad Shetty Kambala committee member from Udupi said that rural sports would be vastly affected if Kambala is banned. Around 52 Kambalas are held in Dakshina Kannada and Udupi districts annually. The officials of animal husbandry department should personally view and experience Kambala to get a clear picture of the sport, he added.