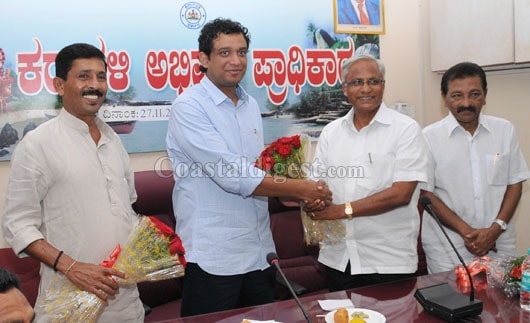 Addressing media persons in at CDA office adjacent to Mangaluru City Corporation building, the former KPCC secretary said that he had already discussed with all the ministers from coastal Karnataka regarding his new responsibilities.

He said that he would tour three coastal districts — Dakshina Kannada, Udupi and Uttara Kannada — extensively, and discuss development activities with deputy commissioners of the districts concerned.

Promising that he would ensure the development of tourism in the beaches along the coast, he said that the new chairman said that the Authority would actively pursue the State Government’s request to the Union Government for relaxation of Coastal Regulatory Zone norms for developing beaches.

He also stressed on the need for a social media strategy for the Authority and said that it would help in getting feedback from people.
Thanking the State Government for giving him an opportunity to serve the Coastal Karnataka, the son of former Union Minister Margaret Alva said that his experiences in the region would help him in carrying out his responsibilities.

The appointment comes after nearly two years since the previous Chairman resigned. This period saw dormancy of the Authority, with few development works having been undertaken in the past two years.