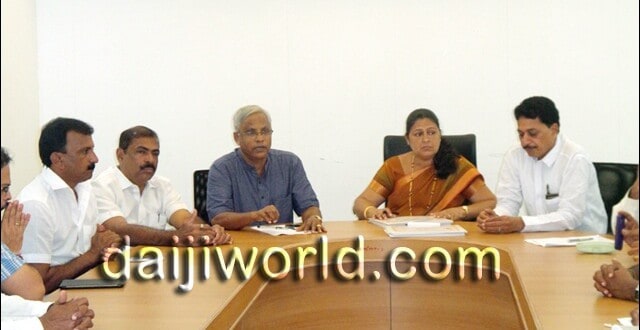 Mangaluru, Aug 6: Addressing a press conference held here relating to water woes under which the citizens of the city reeled since the last five days, MLA, J R Lobo, warned that strict action would be taken against those who were responsible for the rupturing of the main water supply line to the city from Thumbe. He also took the officials to task for their lackluster approach in keeping close watch on water pipeline and supply.

Briefing media persons about the sequence of events, he said that on August 1, it was observed that there was severe depletion in quantum of water flowing through the 80 mgd pipeline supplying water to the city from Thumbe purification plant. A thorough check revealed water leakage in the main line near Kannur mosque. Thereafter, water supply was suspended from Thumbe plant, and work was undertaken with the help of a number of JCBs, tipper, generators, machinery, and tools, he explained.

During the work, it was observed that a 1100 mm pipeline about ten feet below the main pipeline had also been broken, as a result of which water flow to Padil purification plant was hampered.

For removing sand and debris heaped by people on the pipelines, machinery and equipment had to be used. Because of rain and slippery clay, the operation took longer than expected, and normal supply was resumed on August 5, he stated.

As a precautionary measures against disastrous consequences of such incidents in future, he said that steps like surveying of land acquired wherever the pipeline passes through, marking of borders with red flags, planting of signs at different places, etc would be undertaken. It has also be decided that whenever a connection road to private property needs to be laid over the spot through which water pipeline passes through, the concerned will have obtain permission from the city corporation in advance, and lay the road in tune with the measures suggested by the city corporation engineer. All these measures would come into force with immediate effect, as per a decision taken, he narrated.

Lobo also thanked the citizens of the city, city corporators, opposition leaders, media etc for supporting the corporation and extending cooperation to it at this time of crisis.