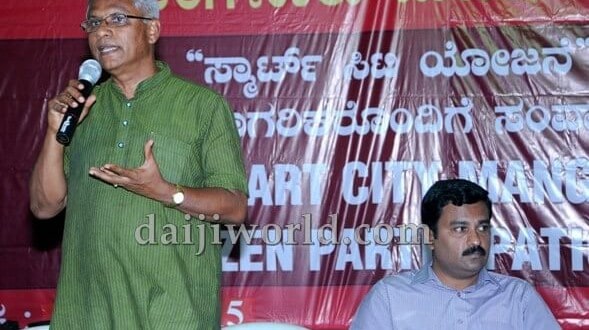 Mangaluru, Oct 12: The city corporation here had organized a public interaction at Gorakshanatha auditorium at Kadri in the city on the evening of Sunday October 11 to provide them with an opportunity to explain their dreams about smart city concept. As the city has been selected as one of those eligible to be developed into a smart city, it is prone to a change of face with added facilities and public conveniences.

Many came up with suggestions to build ring road, improve traffic conditions, build mono rail, and provide free WiFi all over the city. There were also those who insisted on road expansion, improved infrastructure, more employment-oriented companies, increasing internet bandwidth and other things. The suggestions included a plea to the citizens to develop a mindset to sacrifice their land in the long-term interests of the city, wherever it is required for development.

Rajya Sabha member, Oscar Fernandes, addressing the gathering, introduced the concept of building road over road, which he felt, would tide over the problem of traffic and pave way for smoother and speedier movement of vehicles. He also laid emphasis for reforms in the field of power consumption by way of using solar power and LED bulbs.

Local MLA, J R Lobo, noted that the city is emerging as one of the important places of India. He said that it is on the threshold of being included in the list of 20 cities which have been chosen for introduction of smart city concept. He said that there is a goal to attract investment in different fields in the coming days.

City corporation commissioner, Dr H N Gopalakrishna, explained that the last date for eliciting views from the people on what are their ideas of the smart city concept, has already been postponed. He informed, that the last date, which was given as October 5 earlier, stands revised to October 15 for the purpose. He invited people to submit their opinions to the city corporation on this issue.

A number of people including Ramaiah Shetty, Manohar Shetty, Shyam Bhat, Jagadishchandra, Vishwanath Kotekar, and Rajaram Shetty, came up with suggestions on the subject.