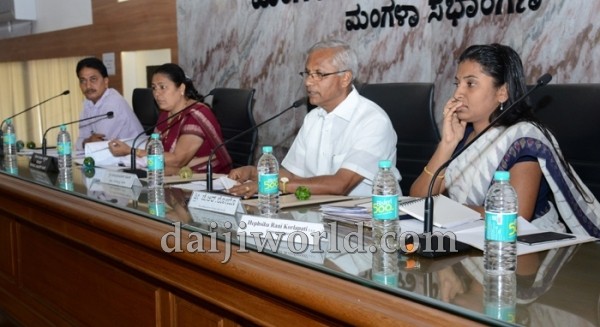 Mangaluru, May 8: A single window system will be introduced for issuing licences for construction of houses measuring less than 2,000 sq ft, said MLA J R Lobo.

He was addressing a review meet at Mangaluru City Corporation here on Friday May 8, chaired by urban development minister Vinay Kumar Sorake.

Lobo made the announcement after one of the MCC members suggested that people who build houses measuring less than 2,000 sq ft could be given licences as is done under Bruhat Bangalore Mahanagara Palike (BBMP). Welcoming the suggestion, Lobo said that a single window system would be introduced and licences would be issued within a day.

During the meeting, CREDAI D B Mehta said that licences for constructing houses and buildings had been pending for long. When J R Lobo asked an official for statistics, it was revealed that out of 2,233 applications, 1,902 were issued and 331 are under process.

“Licences should be given on first come, first served basis and issued within a maximum of two-three months. The last time building bylaws were set was in 2006. The bylaws should be either amended or new bylaws introduced,” he said.

He also said that the refundable security deposit paid by builders while applying for licences has not been paid back even a year after submission of completion certificate. “Around Rs one crore is pending to be paid to CREDAI members alone despite them having submitted completion certificates. The same is the case in deposits for temporary water connections,” he said.

In response, J R Lobo directed the MCC commissioner Hephsiba Rani Koralpati to pay the security deposits back within a month of submission of completion certificates. When he suggested having a file monitoring system, Korlapati replied, “There are minor lapses in providing licences. We will conducte a file disposal drive to clear the pending licence applications.”

Vinay Kumar Sorake took the officials to task and demanded to know why files were not moving, but no one gave any reply. J R Lobo said that table inspection should be done from time to time to resolve the issue at the earliest.

During the meeting, Sorake also ordered the suspension of a clerk over the issue of pending birth and death certificates.

J R Lobo said that there was a lot of confusion over issuing of birth and death certificates, even though the system is computerised and certificates are supposed to be disposed off within a day.

An official at this point said that while people applied for birth and death certificates, a clerk named Bhaskar insisted that the governing body should be mentioned as MCC instead of Karnataka government, which led to undue delays. Lobo called for the clerk and took him to task, saying that MCC too comes under the Karnataka government and he should not be insisting on changing it to MCC. Sorake then asked the MCC commissioner to suspend the clerk on the spot.

The issue of solid waste management dominated the meeting. J R Lobo asked the officials of Antony waste management company to explain its work as per the contract. The officials of the firm replied that their work included door to door collection of solid waste, cleaning of drain measuring less than one metre, sweeping certain roads, and cleaning 6 km stretch of the beach.

When Antony firm representatives were asked to explain, they said that they had not received the entire amount from the MCC. “We have invested Rs 35 crore on vehicles and on salaries. The process was supposed to start in January but got delayed till February, and we have paid salaries for four months from our own pockets. We have one machine to clean the drains and two more are expected next week.”

Responding to the issue, the MCC commissioner said, “We have paid the company for salaries and fuel, and the rest will be paid soon. The company has given two bills of Rs 1.66 crore and Rs 1.84 crore. We will exclude the drainage work as it is not yet done. We have given a deadline of one week to start the work on cleaning drains and by May end all the drains in the city should be cleaned.”

Former mayor Mahabala Maarla said that a machine worth Rs 52 lac meant for cleaning the roads has been lying in the shed. “Antony company has to take the machine on rent according to the contract and use it to clean the city,” he said.

J R Lobo told the health officer to monitor the work done by the Antony company.

To this, former mayor Shashidhar Hegde said that a committee has already been formed to discuss the issue and it would be reduced next year.

Regarding upgrading of markets in the city under phase two of ADB project, J R Lobo asked town planning consultant Dharmaraj to develop a concept so that funds could be obtained from the government.

Sorake said that a special meeting would be called to discuss plans for upgrading the markets and that June 15 has been set as deadline to complete work on Bejai and Jeppu markets.

Regarding renovation of Town Hall, MCC commissioner Hephsiba Korlapati said that there were some technical issues but they have been almost resolved now. “We will call fresh tenders and the work will be completed as soon as possible,” she said.

Speaking to the media later, Sorake responded to a question on the demand for MCC commissioner’s transfer by several corporators, and said that the issue has been resolved. “There was minor misunderstand which has been resolved now. The chief minister has told everyone to coordinate and things will go right. I had a meeting with everyone concerned the issue has been set right.”

To a question on the construction of footpaths, he said that though second phase of ADB project has been sanctioned, the funds are yet to be released. “The contractors are not coming forward for the work. We have MoU with Delta and we can get the footpath and drainage work done through them. It is not a big problem and will be sorted out soon,” he said.