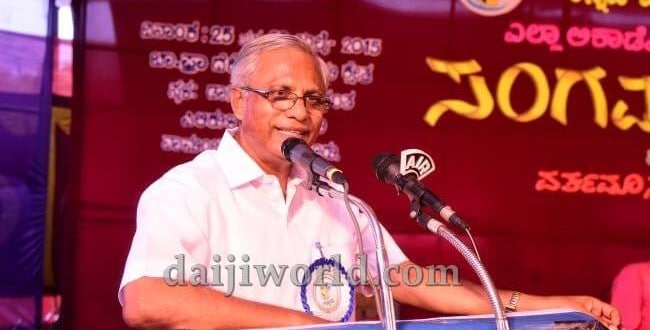 Image from post regarding Mangaluru: 'Sangama Sambhrama' ends on high note with discussion on culture

B A Mohammed Haneef, president of Karnataka Beary Sahitya Academy welcomed the guests and the gathering.
Addressing the gathering, Dinesh Amin Mattu, media advisor to chief minister Siddaramaiah, said, “Normally culture means art and literature. Some arguments state that literature and culture are nothing but humanity. But today there is discrimination in society over divisions in culture. But culture is nothing but the food we eat, clothes we wear and our celebrations.

“Generation gap is the main reason for the vanishing of culture. Our parents say children have forgotten their culture, and when we become older we say the same thing. This is nothing but generation gap. Indian mindset is hippocratic. We talk about past culture, but then what is present culture? When we say we have to save our cuture, the question that arises is what is our culture? When culture is mixed with politics then the trouble arises. One political party always talks about cultural nationalism – this type of nationalism refers to culture of one community.

“Gandhiji always said one who is born in India is an Indian. When people of Dakshina Kannada go to others districts, people refer to attacks by fringe groups and ask ‘you are educated, then why do you act like Taliban?’ This land is the most secular region in the whole state. For example, Mogaveers catch fish and Muslims buy it in lots and then again sell it to the small Mogaveer vendors. Our nation is multi-cultural but some political parties are trying to ruin the bond between diffferent cultures. Following and celebrating any religious belief is not a problem but using it for political gains is bad.

“People of other districts have a misconception that DK is Hindutva laboratory but it is not true. If you see the result of 2013 Assembly election two Muslims and one Christian candidates were chosen from this district. People of this district are smart,” Mattu said.

District incharge minister Ramanath Rai said, “Our district has seen many social changes over the past so many years. When I was a small boy there was zamindari system. Very few had their own home or property. But today in any village most people have their own homes. But as we go further and further we are digressing from our path. Protecting the multi-culturalism which our ancestors had followed is very important. My own constituency where Muslim population is the highest has chosen me against a Muslim candidate, and that when the Janata party was strong back then. So it is very clear that people do not consider religion, but only the goodness of a person.”

B M Haneef said, “Many people had criticized Dinesh Amin when he left his job at a Kannada daily but I always knew his decision was right. Culture should never be mixed with politics. Breaking the multi-cultural fabric of our nation is not that easy, it has deep roots. In 1999, the first heart transplant of India was conducted by Dr Cherian, a Christian, and the heart was transplanted from a Muslim to a Hindu. so cutting such multi-cultural roots is not easy. People are smart, they understand everything.”

In his presidential address, MLA J R Lobo, who was also a former founder executive director of Pilikula project said, “From past two days ‘Sangama Sambhrama’ is being held here. We feel as if we are entering a different world here. Making changes with time is called culture. A man who says he is right and does not change cannot be successful. Even Hitler tried to do same thing, so he could not succeed. We have to acknowledge the service rendered by the presidents and the members of these academies. This is a service they are rendering to the language. We should teach our youngsters about our culture.”

Paintings were presented to presidents of Konkani, Tulu and Beary Acadamies by Karnataka Lalitha Kala Acadamy. Roy Castelino, president of Karnataka Konkani Sahitya Academy proposed the vote of thanks, while Bhaskar Kukkolli compered the event.