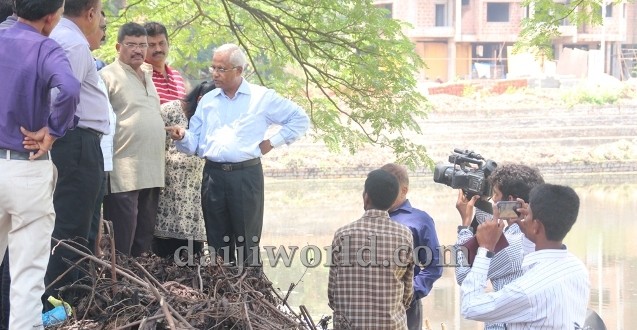 Image from post regarding Mangaluru: Rs one crore released for Gujjarakere lake development

Speaking to media representatives thereafter, he revealed that a sum of one crore rupees in the form of grant has already been released for undertaking development works here, through the department of minor irrigation. He noted that the works, which have been taken up after a pause, have been progressing well.

‘Before taking up this work, we thought it would be easy to complete dredging work. But now the real size of the problem is coming to the fore. Here accumulated silt is much more than anticipated, and its quantum could not be properly assessed so far. During the last three weeks, lot of silt has been removed from the lake. But untimely rains have resulted in rising level of water in the lake, creating bottlenecks in the development works. At present, the depth of the lake is between 20 and 30 feet, and it will be very difficult to remove silt further without emptying water from the lake,’ Lobo explained.

The MLA already has discussed the gravity of the problem with the officials of minor irrigation department, and suggested to press into service dredting machine for the work. He said this machine will begin to work here in a couple of days, after which water would be pumped out and dredging work will be undertaken again.

He has asked the concerned to complete all the works within a month.

When several locals complained to the MLA that water from local drains was flowing into this lake, he promised them to put in place alternative system for the discharge of drain water once the first phase of work is completed.