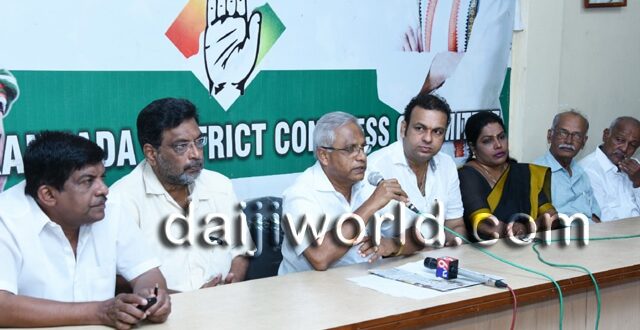 Addressing media persons here at district Congress office on Saturday September 24, Lobo said, “Mangaluru being selected for the smart city project is a huge contribution by the state and centre to the city. Our proposal was ranked sixth in the entire country, and first in the state. I thank the people of Mangaluru, MCC, representatives of state and central governments for their support and cooperation in managing to get this project.”

“Last time our proposal could not make it. But this time, we had taken fisheries and old port as our unique selling point. The Smart City is a project wherein both state and centre will contribute equally. The state and centre both will provide Rs 100 crore each in the first year and Rs 150 crore each in the second and third year respectively. The Central government is an ocean but the state providing an equal share despite limited financial resources is commendable. Therefore, I thank the state government and urge all the support from the general public in making this a successful project.” Lobo added.

“The first step in the smart city project is forming special purpose vehicles (SPV). The SPV will have 17 directors, and that is one representative from central government, one independent representative, seven representatives each of MCC and state government. The state government will form the SPV by the end of this month. The cities which got the smart city project in the first phase were not that successful in implementing the project. Thus we have already started the process at the earliest. So that we can make Mangaluru City, number one in implementing the project.”

“Along with old port, tourism will also be developed. Computerization of MCC has already been under process, and by next year, MCC will be completely computerised. The state government has sanctioned Rs 400 crore through Asian Development Bank for the second phase, Rs 150 crore will come in for renovating the drainage system of the city, and many other forms of grants the city will witness a total of Rs 1700 crore of investment in the coming three years, an amount which the city corporation has not seen to date. By all these funds the city’s infrastructure will be developed and we will strive to make Mangaluru a model city to the entire nation,” Lobo said.

On being asked by the media persons about the steps to address traffic and parking problem in the city, Lobo said, “We have already taken steps to make the main roads four-laned. In some places, work on footpaths is already under way. Two towing vehicles will come to the city, and wherever there is space, it will be developed for parking. By all these steps, traffic situation in the city will be addressed to an extent.”

Congress leaders, Vishwas Das, Denis D’Silva and others were present.