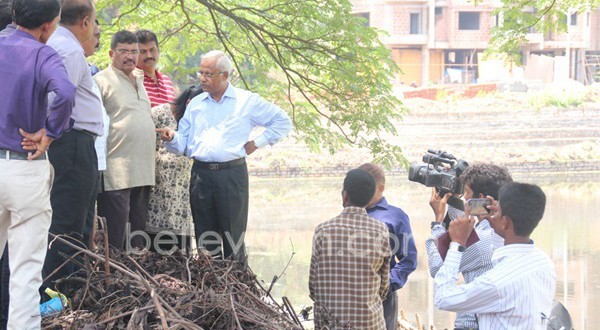 Addressing the media persons, MLA Lobo said, ‘The work once again begun to rejuvenate the lake (Gujjarakere) as the minor irrigation department already released Rs 1 crore in this regard,’ said MLA Lobo.

Quantum of silt underestimated
MLA Lobo said, ‘It was thought that it’s easier to desilt the lake at initial stage, but it’s indeed a herculean task, because the quantum of silt is yet to be ascertained. The workmen worked for 3 weeks removing silt from the lake. Meanwhile, the untimely rain posed hindrance to further works. The lake is 20 feet to 30 feet in depth and its difficult to desilt,’ said MLA Lobo.

Dredgers
The dredgers will be pressed into service to desilt the lake in 2 days and water will be emptied, said MLA Lobo. He advised to complete the works by one month.