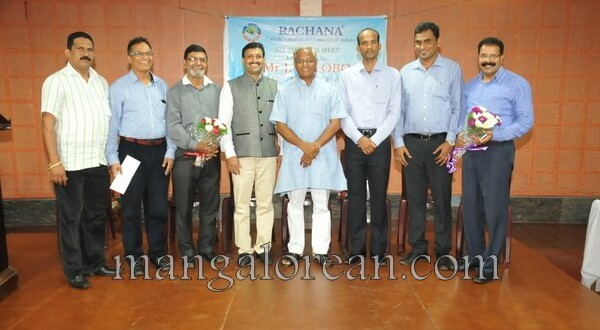 The programme began with an invocation. President of Rachana, John B Monteiro welcomed the gathering. MLA J R Lobo was felicitated for being appointed as the Chairman of the Backward Class and Minority Welfare State Legislative Committee.

Addressing the gathering, MLA Lobo said, “When people requested me to contest the elections, in the beginning I refused but later I thought that from the past 25 years our community did not have anyone in politics and so I decided to contest. As soon as I agreed to contest, people from the South constituency supported me, they kept their trust in me and worked hard to win the election.”

He further said, “I will try my level best to fulfill all the demands of the people of Mangaluru constituency. Sometimes in government offices, we do not have our own people to carry out all the work promptly. We, the elected members, have to run behind officers to complete the work. When I was a government officer, my work was limited and we used to get holiday on Sunday, but after being elected as MLA, there is no holiday on Sundays or any other day; we have to work round the clock.”

He also said, “The government with trust in me has given me various posts. Recently, I was appointed as chairman of Backward Class and Minority Welfare in the state legislative committee. This is an honour for the people of Mangaluru South constituency for electing me as the MLA. There are a number of problems in the district and it is very difficult to solve them. We need to develop and also solve the problems at the same time. After 25 years a Catholic has obtained this seat and the opposition will not sit quiet on this; they will try to create false propaganda. We need to guard our post; the moment we take leisure, someone else will conquer it. We have to retain our position, because we, the Roman Catholics, have only one seat in the government.” He urged the people to support him in his tenure and carry out all works successfully.

Advocate Eugene D’Cunha speaking on the topic “Success and Failure of Christian Entrepreneurship”, said that entrepreneurship is divided into three groups, such as Pre-Independence upto 1970, from 1970 to 1995 and from 1995 till date. During the pre-independence era, there were many roads named like Pinto’s lane, Lobo lane, Vas lane, Simon Lane, Silva Lane, Coelho lane and every name was associated with a strong business; these businesses are still there. After that, there was a land mark called Felix Pai Bazar, a shopping mall with a Christian name, but now we talk about the big malls. Even Don Bosco hall and the tile factories are our identity. After 1970, how many lanes were named after the Christians? Those who had done business before 1970 had a sense of social responsibility and they provided jobs to many people. But among those who did business during 1970 to 1995, only 10 to 15% have succeeded.

He further said that Catholics are good copycats. When someone starts a hotel, ten others will also start it; some started finance without any knowledge, some went to gulf countries, some started chit funds and cheated people. “Many started real estate, but how many have succeeded?” he questioned. “In 1995, many people lost their business and after 1995, many have succeeded but we do not get any news to read about them. In business, we need to be slow and steady to be successful.”

“Before starting a business, we should plan. Normally, we want to become rich overnight. If we get some money, our nature is to spend and our expenditure on social life is more than our income. Profession is different from business. A profession depends on a single person but a business is not like that. For anyone to start a business, he/she should have a business background, should have working experience in the particular field, or should have professional qualifications. We have to see whether we have the capitol to start the business. Some people take money from their relatives and invest; when he does not get any returns on the investment, he loses everything and puts the family members in trouble. In Mangaluru, cases of cheque bounce are among the highest in the country. We have to start our business from small scale and then develop it from there. Also, in general most of us do not know the meaning of goodwill. When we are into a business, we have to be humble and help people. We do not have soft skills and we do not think that the costumer/consumer are the kings in business. Every entrepreneur should know that the customer is the king and we have to retain them. We have to improve our communication skills and try to improve our business,” he said.

“We have lack of dedication and commitment, and have the highest holidays in the world. People of Japan, Korea and China also protest but only after completing their work. While in India, we protest for every silly reason. We have a holiday in the very beginning of the year. In the Christian community, we are busy in weddings, parties or other programmes and we leave others to handle our business. Working from 9 am to 5 pm is not enough, we should be ready to work 24×7 to be successful. There should also be limitations in everything we do,” he concluded.