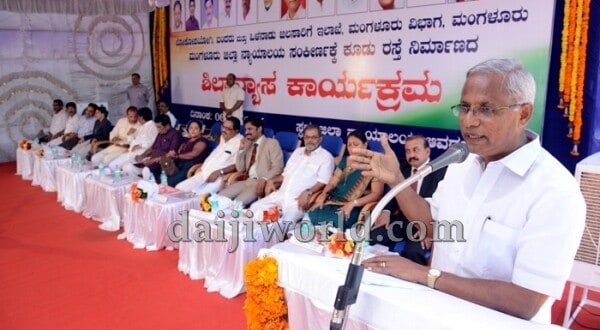 Mangaluru, Jun 6: State minister for public works H S Mahadevappa along with Rajya Sabha MP Oscar Fernandes on Saturday June 6 laid the foundation stone for the upgradation of Court Road here. The 12-metre wide road will be laid at a cost of Rs 11 crore, out of which Rs 8 crore has been sanctioned by the PWD ministry and the
remaining by MLA fund and the MCC. The project is expected to complete in the next 8-12 months.
Addressing the gathering, Mahadevappa said, “Court buildings, housing for advocates and judges, court bhavans and libraries are the basic facilities that help in improving efficiency in the legal system and disposing of cases in time. Hence the state government has sanctioned funds for the upgradation of the Court Road here, and also state-wide, we have sanctioned funds wherever there is demand for these facilities. We are also developing libraries.”

Lauding Oscar Fernandes, he said, “During the tenure of Oscar Fernandes as union transport minister, Rs 2,000 crore was sanctioned for Karnataka for road development. When he was the union minister, after 40 years, national highways increased by 40 percent. Karnataka has the highest number of national highways with the longest stretch in terms of kilometres. In just two years, 11,000 km of road work has been done in the state (under Congress-led state government).”

Regarding Shiradi Ghat road work, he said, “Oscar Fernandes and I have visited Shiradi Ghat to inspect the work. The main enemy of a road which leads to its deterioration is water on the road surface. With 5,000 mm of rainfall, Shiradi Ghat had totally deteriorated, we now we are constructing it with the best available technology to ensure it lasts. It was supposed to be ready by June, but rain during April hampered the work. We will finish it fully, but we will not compromise on the quality by hurrying up. It has been a long-pending demand of the people and we will do a thorough job.”

He also said that work on Shishila – Bailapur alternative road has started. “Our priority is to establish road connectivity throughout the state, which will also boost tourism and economy. During 2014-2015, 148 km of road was constructed in Dakshni Kannada district,” he added.

Responding to a demand put forth by MLA J R Lobo on the occasion for the construction of a 17-crore bypass road from Netravati to Kannur, Mahadevappa said that he would look into it. He also said that his ministry would considet J R Lobo’s another demand of widening the approach road to Mangaluru airport and construction of a bridge connecting the airport and the city.

“District incharge minister Ramanath Rai has requested for a bridge connecting a temple and a mosque in his constituency. We will sanction it as it will boost religious harmony,” he added.

In his address, Oscar Fernandes said, “The state government should adopt the road-over-road technique to reduce traffic problems. It is also cost effective, and can be taken up in Mangaluru on an experimental basis. Heavy as well as light vehicles can move on them.

“I thank the PWD minister for his support and cooperation to development works and hope that in future also he will continue to the same,” he added.

He also added that the Court Road was being developed so as to provide basic facilities which would benefit the common man.

MLA J R Lobo said, “This work has been given importance not out of any political interest but because it is a basic facility for people. The PWD minister has already sanctioned Rs 6 crore for the suspension bridge at Tannirbavi and the remaining Rs 6 crore would be released next year. A bypass road from Netravati to Kannur needs to be constructed to reduce traffic problems, and it would also be useful for the railway station.”

District sessions court judge Uma M G thanked and lauded J R Lobo for taking up this initiative and urged that the project be completed within the time frame.