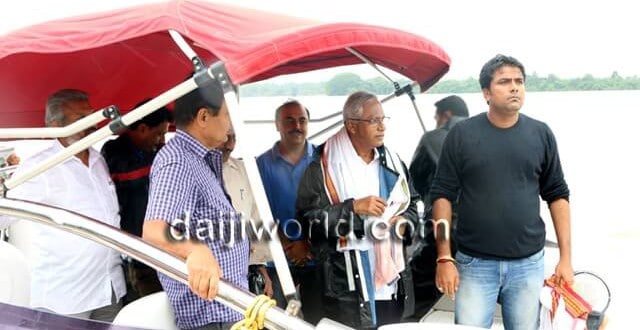 Mangaluru, Jun 23: Commuting on major roads in and around the city has been rendered nightmarish of late on account of influx of large number of vehicles and mad rush. Vehicles pour into the main roads from various connecting roads, choking the traffic as a consequence at the main road. Therefore, highways which are built for faster and smoother driving, are proving to be otherwise in a number of cases around the city. Therefore a need is always felt for alternative roads which can de-congest the traffic, apart from providing access to interior rural belts of the coast.

A case in point is Mahaveer circle (Pumpwell) from where roads fan off towards Kerala, Bengaluru, and Mumbai. The situation here is always chaotic, and vehicles move at painstakingly slow pace. One of the reasons for this situation is the rise in the number of vehicles which move towards Bengaluru after reaching the circle from the direction of Kasargod through national highway 66. There is no good approach road to Mangaluru Junction railway station. This situation can be addressed to a great extent by building a bypass road from Netravati bridge to Adyar-Kannur via Jeppinamogaru, feels Mangaluru (south) MLA, J R Lobo.

During the visit of state PWD minister, H C Mahadevappa, to the city recently in connection with the inaugural of the court road, Lobo submitted a proposal for building an eight-km-long bypass road with a width of 30 feet, which he asserts, will release the pressure on the highway. The MLA requested the minister to provide for funds for this road, which may cost around Rs 20 crore.

Speaking to daijiworld, Lobo asserted that this road, once built, will not only bring down pressure of vehicles on the roads in city, but will also result in expansion of the city, and connect it with the rural pockets adjoining the city. He felt that this road will also pave way for the development of hinterland lying on the bank of River Netravati.

Lobo, who conducted inspection of the spot in the company of PWD officials and local corporator Praveen Chandra Alva last week, is optimistic about the prospects of this road giving a boost to tourism. “This is a beautiful area, and ideally suited for development of tourism. Even though it is close to the city, it suffers from lack of good roads as of now. Therefore, we will try to get funds for the bypass road from the tourism and PWD departments,” he explained.

The proposed bypass road, which will connect the city with Bengaluru via Jeppinamogaru, will help people using Mangaluru Junction railway station. “In addition, we will take care to ensure that the level of the road is above flood level, with additional facilities like jogging track, cycling track, and seats,” Lobo added.

Lobo said that the PWD minister has already directed officials of his department to conduct survey of the land required for the bypass road and prepare a detailed project report as soon as possible. The inspection conducted by the MLA in the company of PWD officials was in tune with this exercise.

If this project is executed as planned, it promises to turn into a landmark in the city with serene and green environment and other facilities, which would greatly enhance the beauty of coastal Karnataka, apart from contributing to ease the traffic on the highway near the city.