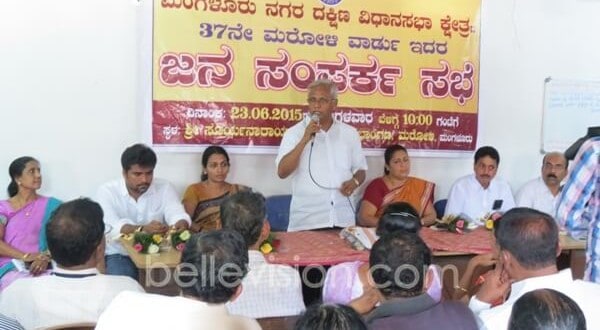 Mangaluru, 24 June 2015: The peoples’ interactive of Maroli ward was held at the chairmanship of MLA J R Lobo at Suryanarayan temple auditorium, Maroli here on Tuesday June 23. The officers of different departments were present.

MLA Lobo accepted the petitions of all the people and responded to a few issues within his capacity in the presence of mayor, deputy mayor, corporator and department officials.

Most of the petitions were pertaining to polluted drinking water, improper underground drainage and road, power cuts etc. He advised the officials to solve the issues on the spot if possible.

Speaking on the occasion, MLA Lobo said that the ward lies in a hilly region and it’s difficult to provide all basic amenities to local residents. The development works are underway under MLA local area development fund and different departmental funds @ Rs 1 crore. The ward gets drinking water directly from Thumbay vented-dam and possibilities are higher to get sediments. Meanwhile, the efforts will be made to supply the water from GLSR overhead tank located at Padil, here shortly, said MLA Lobo. He also said that the underground drainage of ward will be connected to the mainline under ADB – 11 project.

The pension authorization papers were issued to 16 beneficiaries on the same occasion.