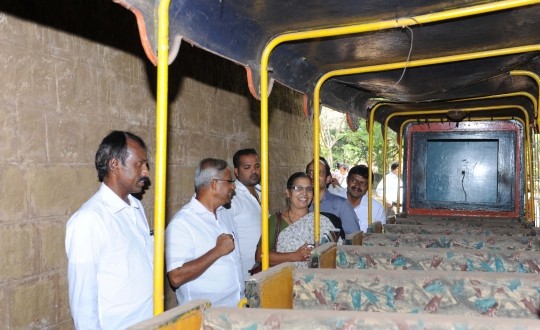 Mangaluru: MLA J R Lobo visited the Kadri park to review the development work of the park here, on April 17.

After visiting the park, Lobo speaking to the mediapersons said, “In our city, we have only one park and from the past one and half year, we are trying to bring total development in the park. We have laid the foundation stone for the musical fountain recently and the work is under progress under the Mangaluru Urban Development Authority. The government has sanctioned Rs 5 crore for the same.”

On April 16, the Karnataka government, under the Women and Child Welfare Department, has sanctioned Rs 37.54 lakh to Bal Bhavan for a new children’s train. From the past one year, we have been trying to get the funds by providing the necessary documents. The minister for Women and Child Development Umashree, and Rajneeh Goel sanctioned the funds recently. In Shivamogga, the children’s train is very good, officers from Mangaluru will go to Shivamogga to see the performance of the train. A meeting will be called to start the work for the new children’s train, discussions will also be held with the Railway officers to start the work soon and within three months the children’s train in Kadri park will be ready.”

“To develop the entrance of the Kadri Park, I have sanctioned Rs 30 lakhs from the MLA fund and the contract has been given to Nirbithi Kendra. We have also planned to start a park for the specially abled children at a cost of Rs 35 lakh. We are looking for donors for the same.”

“The horticulture department has installed sprinklers in the park and due to shortage of funds, they were unable to carry out other work. Our main aim is to increase the greenery in the park. The Horticulture department is striving hard to develop the park. Compared to last year, the Kadri park has been now developed and in the coming days the park will be beautified.”