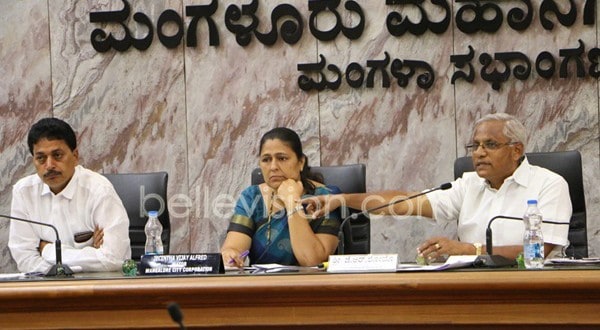 Mangaluru, 19 May 2015: MLA J R Lobo advised the civic body to form a development Committee with mayor as its chairperson to lay emphasis on developing key roads and footpaths, underground drainage, drinking water supply and other civic amenities in order to better utilize about Rs 85 crore that civic body has under Premium FAR Fund.

MLA Lobo discussed the norms for building construction, reconstruction of municipal markets, underground drainage network, precautionary measures ahead of monsoon during the meeting held with the peoples’ representatives and civic officials here on Tuesday May 19.

He also advised the civic body to frame rules for building construction by development Committee of civic body, since the people are facing difficulties while constructing new houses and it would simplify the process. The rules should be framed in consultation with mayor, deputy mayor, MUDA and other related departments.

He also advised to revise the property valuation as it’s marred with controversies, besides to prepare a preliminary report on naming the streets by holding meeting with peoples’ representatives.