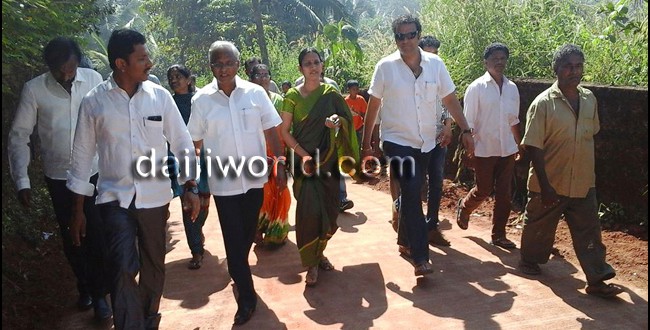 Mangaluru, May 7: He is one of the few bureaucrats to enter politics in the state. But the bureaucratic qualities are there to stay. In fact he has blended them with the wisdom of a politician. J R Lobo, the MLA of Mangaluru South has created a record during his regime when it comes to the number of road projects he has taken up in his constituency. A close look at the road work carried out in Mangaluru South assembly constituency in the past 2 years after he became MLA and an analysis of the ongoing and completed projects prove a fact. That is – nowhere in the past have such projects been taken up with so much of zeal and speed in this region.

Lobo, a former bureaucrat who spent most of his life in and around Mangaluru city in various capacities, knows his business well. He is well aware about the responsibilities of a legislator and the amount of expectations from him. He is tireless. He wants his projects to speak rather than himself projecting his achievements.

The facts in black and white define the road work done and being done in the constituency.

Out of the total 79 projects the lowest (as per volume of expenditure) was Rs 2 lacs spent on tarring of the road at Shakthinagar Kukkebettu bus stop and the highest amount spent was on Rs 4 lacs on Kudkorigudde Koraga colony for basic amenities and drainage.

The projects cover all the areas of the constituency without any emphasis on any single area. The projects cover even the rural areas which include concreting of Adam Kudru, Manjadka Road, development in Bajal Jayanagara and drainage system in Kannagudda.

The breakup of source of expenditure is as below:

The breakup of source of expenditure is as below:

There are presently 33 projects on the verge of completion.

Ongoing work also covers all the areas of the constituency including rural and urban. Areas like Bengre, Adam Kudru and Kannagudda are covered. The lowest amount spent is Rs 2 lacs for the road connecting the highway with Tharethota. The highest amount being spent is Rs 50 lacs on the protection work near Sri Vishnumurthi temple in Jeppu Kudippady village.

All these road projects include concreting, interlock of roads, compound walls, drainage improvement, repair and construction of small bridges, etc.

For the purpose of this analysis, only road projects have been taken into account. A city that once upon a time was bereft of good roads is finally seeing some progress. Perhaps one fact that stands out is the equal importance given to road development in urban and semi-urban/rural areas.

Speaking to daijiworld, J R Lobo said that roads, drinking water and underground drainage are three basic problems faced by the city, and he has not only given importance to roads but other two issues also. “To solve these issues we need huge investments and efforts are going on to work on these aspects. We are trying to get sanctions from ADB and once it is approved, we can do much better,” he said.