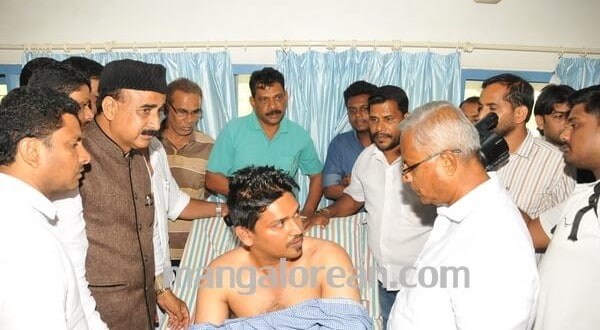 Mangaluru: MLA J R Lobo visited Attavar Assault Victim Shakir, who was recently assaulted by Hindu activists, at Unity Hospital where he has been admitted following the barbaric attack here, on August 25.

Speaking to the mediapersons, Lobo said that he was apprised of the incident on August 24 evening and appreciated the police for managing to nab the assaulters on the same day. He said that Mangaluru has a good name and called an intellectuals city, and such “barbaric” acts are not fit for our society. “There are rules, laws, the police and a system to take action against any crime committed by anyone in the society. We cannot take law into our hands, even if somebody has aggrieved us; the system has to be followed.”

He said that all are equal in the eyes of law and that he was always against injustice. He assured that the police would take appropriate against those who were involved in this assault, irrespective of religion, caste or creed. ” 99.99% of the people in the city do not support or harbour such views, but it is the 0.01% that cause such incidents. They will be dealt with strictly. We are not living in the stone age nor is this a ‘jungle raj’ for people to take law into their own hands.”

“Many people are working hard to make a good name for Mangaluru and attract people from all around to come, invest or take a vacation in the city so that it can develop and prosper, but such incidents paint a bad colour to the city and drive people away from it.”

He also appreciated the members of the Muslim community for maintaining peace in the city after the incident. JD(S) leader Haider Parthipady is said to have issued a circular to all masjids asking the people of the community to refrain from retaliating with violence and let law take its own course.