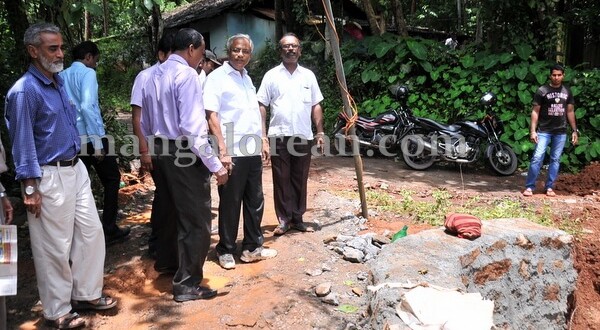 Image from post regarding Mangaluru: MLA J R Lobo visited the culvert at Umikaan-Kannagudda Road, which had collapsed last week, here on July 25.

Speaking to mangalorean.com, Lobo said, “The Culvert in Umikaan atKannagudda-Saripalla Road collapsed on July 18 during the early hours due to heavy downpour. When the ward Corporator Prakash and the locals informed me about it, I was in Bengaluru attending the assembly session. I received information that the bridge had collapsed.”

He further said that the movement of traffic is not possible in such a condition. “When I had received the information, I immediately called the Superintendent engineer of Mangaluru City Corporation to visit the spot and take up the repairing work immediately. According to the engineer and the officials who visited the spot, an alternative road was made through a private property. They also promised me that the work would be started from Monday. As a special case the work would be started without waiting for the estimate or sanction. I appreciate the work by the Commissioner and the Corporator for visiting the spot everyday even though I was not present at the spot. The concerned authorities are doing their job well.” He thanked the people who wholeheartedly allowed for the provision of a temporary road and also appreciated the swift response by the concerned authorities. He also said that to reopen the roadatleast one month is required as the concrete and cement work needs time for the curing process.

When asked about the Kannagudda – Umikaan road which is in pathetic condition, Lobo said, “I am aware that the road is in a pathetic condition but the road comes under the Railway Department. I have been pressuring the railway authorities to hand over the extreme end. They had suggested that once the boundary is marked, they will give the land at the extreme end. But since it is in the middle of their property, they are not allowing us to repair the road now. If they allow us to repair the road, it will be a win-win situation for the railways and the public. I will arrange the funds to repair the road.”

He also said, “We have passed a law according to which we will not build compound walls for those who give the land to the government; instead, we will give them TDR (Transferable Development Right). This decision was taken as the government does not have funds to pay the amount to each and everyone. The land owners can sell the TDR to builders or developers.”