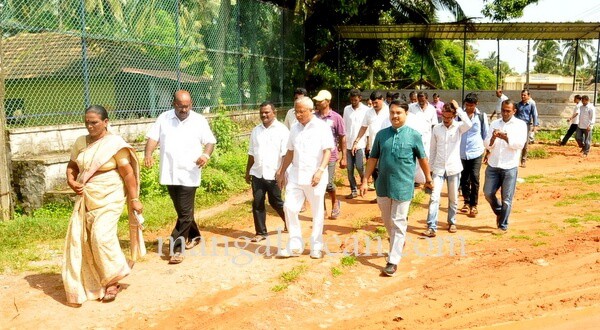 Mangaluru: MLA J R Lobo, along with project officials, inspected the work of the Bengre breakwater project at Bengre here, on August 18.

Addressing the mediapersons, P Channappa Naik (Project Director of Sustainable Coastal Protection and Management Investment Programme Karnataka, Technical Director of National Cyclone Risk Mitigation and Managing Director of Karnataka State Construction Corporation (KSCC)) said that the central government constituted the National Coastal Protection Project (NCPP) in 2007 to discuss about soil erosion affecting the countries coastline. About 50% of Karnataka’s 300km coastline faces serious impact and needs to be treated. Sixty kilometre length was identified among the most vulnerable reaches and Ullal has been identified as part of the affected area. When discussions were held to deal with the problem, it was found that conventional methods would not work. So, foreign consultants were contacted. According to them, it is not possible to protect the entire 8km stretch of Ullal with just one structure.

It requires an integrated approach of building four components: North breakwater at Bengre, South breakwater at Ullal and two offshore reefs (each with dimensions of 7m in height, 50m in width, 150m in length, 350m base length) at a distance of 600m from the shoreline to decrease wave intensity. In addition, four inshore berms have already been constructed at Ullal. The berms were constructed using bags of sand made of non woven geotextiles and are specially procured from Denmark since the technology does not exist in India.

Naik further said that if this pilot projects becomes a success, other states like Goa, Kerala and Andhra also planning to implement it. “The inshore berms have shown good results so far and the materials used are eco-friendly and non-invasive to the local environment. But exact results will not appear overnight, we will have to wait for it. Suppose the sand does not accumulate, we will dredge the sand and recharge the coastlines. The proposal has been made for sand nourishment in December.” The above said project constitutes the Tranche-1 phase. This is a first of its kind project undertaken in India.

He further said that the next phase Tranche-2 containing 9 sub-projects which has to be completed by 2019. It will include the coastal areas of 3 districts: Udupi, Karwar and remaining part of Someshwar (Mangaluru).

The Mumbai-based contractor who has undertaken the breakwater project, R B Chauhan has been facing problems from local contractors. Conveying his problems to the MLA, Naik said that though the local people are supporting this project, Chauhan is a victim of “professional jealousy” by local contractors and the continual harassment is forcing him to back off from the project.

MLA J R Lobo assured to have the Deputy Commissioner call a coordination committee meeting with various boards to sort out the problems faced by the contractor that are hindering the completion of the breakwater project at Ullal and Bengre. He also assured the contractor of the local people’s help since the people know that this project is being made for their benefit itself.