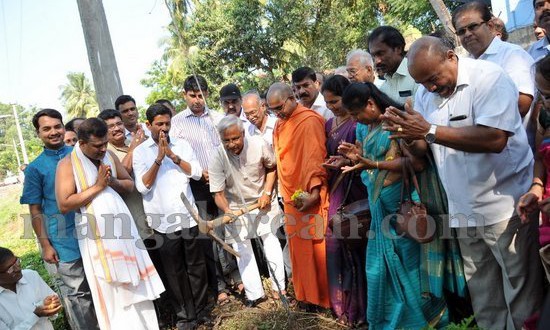 Addressing the gathering Lobo said that the Gujjarakere pond will be developed under the Minor Irrigation development project and the department has sanctioned Rs 1 crore for the same. The Mangaluru City Corporation had initiated the development work but due to insufficient funds the work was not completed. The work will be completed before October with a beautiful garden around the pond. He also urged the concerned authorities to utilize the funds in a proper manner and that the problems with the pond will be corrected during construction. He also said that the people should be united when there is any development work, because if the area will be developed the entire society will receive its benefits.

Mayor Mahabala Marla speaking on the occasion said, “If the Minor Irrigation Department has sanctioned Rs 1 crore for the project, then it is due to the efforts of the MLA of Mangaluru South Constituency J R Lobo. He made a special request for the development of the pond in Gujjarakere.”