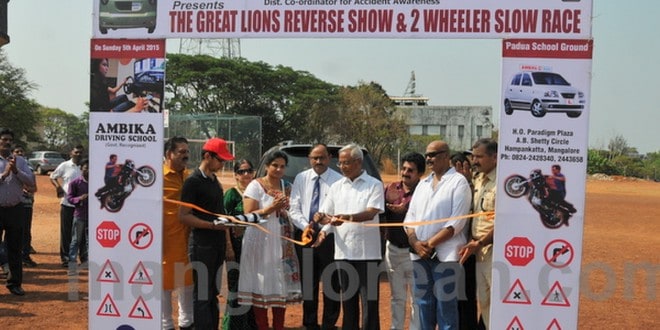 Addressing the gathering, Ln Manjunath Murthy said that the objective of the programme is to bring awareness among the people. “Last month, the Supreme Court brought many changes in the Motor Vehicle Act. Drivers do not have discipline while driving. We need discipline while driving or riding two-wheelers. In our country, there is a law and there are rules for driving. But people are not following the rules. People do not follow lane discipline, which leads to accidents. When a person is alive, he has many responsibilities.” He also said that even though we are careful while driving/riding, others will create problems for us. “In Dubai, the people strictly follow the rules while driving. We have to follow the same discipline in our country.” Ln Manjunath congratulated Ln Agnel for organizing such a programme to bring awareness among motorists and save lives.

MLA J R Lobo speaking on the occasion said that this is a good programme. “Mangaluru is the 4th cleanest city in the country. After Bengaluru, Mangaluru is the second city registering highest number of vehicles. Without the support of the people, laws cannot bring changes. ACP Uday Nayak had made the Balmatta-Bendurwell road as one way and that helped a lot in easing the traffic congestion. But due to pressure from the people, some politicians scraped the idea.”
“When we drive, we do not follow lane discipline. Vehicles moving at slow speeds occupy the fast lane, while others driving at normal speeds find it difficult to overtake and are forced to take the left lane to overtake. Another problem faced by the public and the students is the loud horns. How can we bring changes if motorists do not care for the students or the patients admitted in the hospitals? It is difficult to imagine how the poor students at the Jyothi School cope up with the terrible sound of high decibel horns used especially by bus drivers,” he said.

ACP traffic Uday Nayak speaking on the occasion said that in Mangaluru, the traffic has drastically increased. “Most of the accidents take place due to negligence of the drivers. According to the survey, 14 lakh people die in road accidents every year. In 2020, the figures may reach to 18 lakh. The government has taken all the necessary measures, but modern vehicles that are very efficient and high powered cannot adapt to our roads. 50 to 55% drivers are the cause for all major accidents. If we drive carefully, we can avoid accidents. In Mangaluru, the roads are very narrow. People drive without following the traffic rules. Lane discipline is never followed. While negotiating circles, if we follow traffic rules and give way to other vehicles, traffic can flow smoothly and most of the traffic jams can be avoided. We need to cooperate and adjust to situations.”

He further said that during the mornings, the rate of accidents is high. He urged the drivers to always be alert while driving. “One more cause of accidents is ‘drink and drive’.” He advised motorists never to drink and drive.
Trustee of Sri Devi College Sadananda Shetty, Ln Kavitha Shastry also spoke on the occasion.