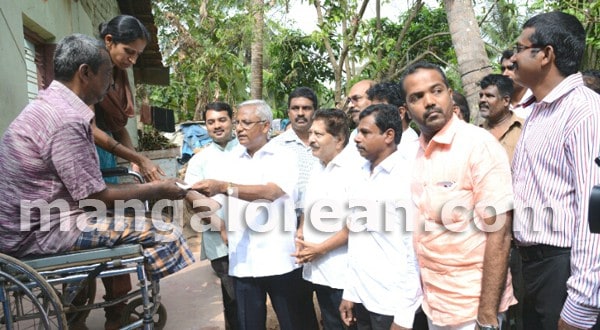 Mangaluru: MLA J R Lobo handed over a cheque of Rs 70,000 to Dayakar Bangera at his residence here, on April 7.

After handing over the cheque to Dayakar Bangera, Lobo speaking to the mediapersons said, “Dayakar Bangera’s house had collapsed on March 24. I, along with the ward corporator, visited the spot. After seeing the condition of Dayakar and his family, I immediately spoke to the Tahashildar and the Village Accountant to sanction funds to build a house for Dayakar before the rainy season starts. The Village Accountant, the Tahashildar and the Revenue Inspector prepared the necessary papers and sanctioned the funds within 4 days under the Calamity Relief Fund.”

Lobo said that the intention is to build a house before the rainy season starts.

Mangalorean.com readers have also contributed towards building the house for Dayakar, after an article highlighting Dayakar’s condition was published on March 29.