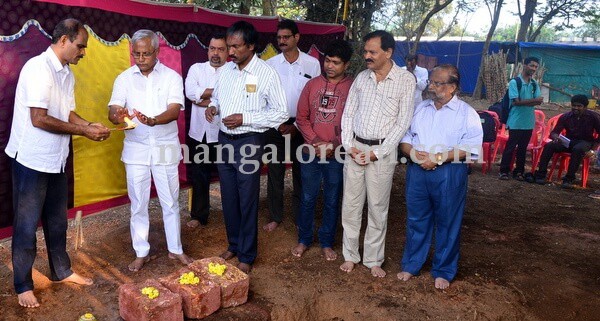 Mangaluru: The foundation stone for the Musical Fountain project was laid by the MLA of Mangalore South Constituency J R Lobo, at the old Deer Park, Kadri here on January 14.

Earlier on March 21, 2015, the Minister for Urban Development, Vinay Kumar Sorake, laid the foundation stone for the Musical fountain by unveiling the plaque but due to some reasons the construction work was delayed.

After giving a start to the construction work of the Musical Fountain project, speaking to the mediapersons Lobo said that six months ago the Musical fountain project was sanctioned by the government through Urban development. Rs 5 crore funds have been sanctioned by the Urban development department. It took six months to prepare the DPR, technical design, tender process and today we have started the construction work. Prabhakar for Yeyyadi is the contractor.

Engineer Venkatesh Pai has done the design. In the 4 acres of land the Musical fountain along with Landscaping, amphitheater for children and Shopping Kiosk will come up. The musical dancing fountain with laser and video projection at the park will be done at a cost of Rs 2.09 crore. The president of Urban development and the Commissioner of MCC have shown special interest to complete this project by June 2016.