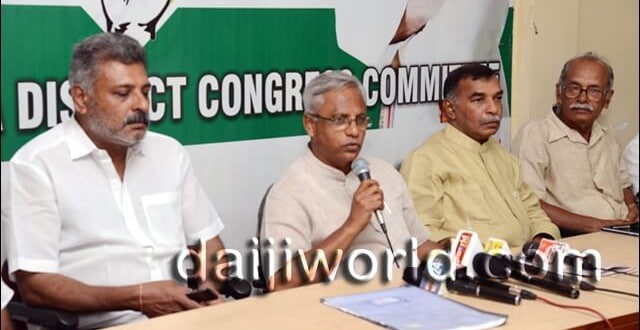 Mangaluru, Aug 4: MLA JR Lobo conducted press meet on Monday August 3 at congress office and said that the state government has called for a special meeting exclusively to discuss on the pros and cons of ‘Form 9/11’, which is creating problems with regard to the land registration for the people of Dakshina Kannada, Udupi and Malnad region. The discussion will be hosted by the department of rural development along with revenue and panchayat raj department.

Addressing the press persons, MLA said that he studied the problem in detail and presented it before the assembly. Form No 9 and 11 should be used only for assessment of tax and recovery thereof in panchayats, and not to consider them for registration or any other kind of record of right. For example, if a person who has 1 acre of land wants to build a home in 5 cents land, he needs only single site approval and for this he has to leave 20 feet road and pay 15% fine which is very expensive. If someone wants to divide their ancestral property and register between the siblings then it becomes very complicated and they cannot register the land without form 9 and 11. If someone has already built a house few years before and wants to sell the house then it cannot be registered by the buyer as it cannot fulfill the requirements of form no 9 and 11. As this is computerized software even a single column cannot be left empty. It is mainly to decide the tax and check weather tax is paid. This form no 9 and 11 should not be considered for registration. Now because of this form no 9 and 11 panchayath raj is dictating the revenue and urban development departments.

Panchayath development officers do not have accurate knowledge or training on this form no 9 and 11. They say high court has directed to this computerization. But then revenue commissioner Rajiv Chawla had given a report saying that for old buildings and or land this form no 9 and 11 should not be considered. Speaker had directed to
convene an exclusive meeting for discussing on these two forms. The government has to correct these forms, Lobo opined.