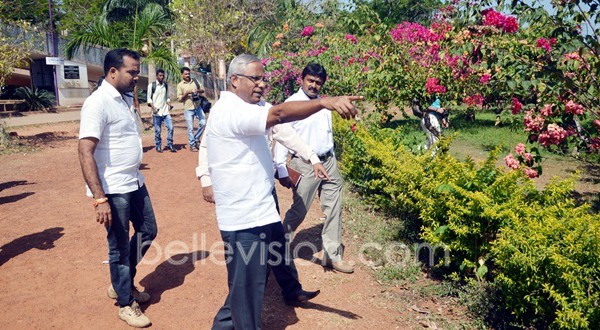 Mangaluru, 18 Apr 2015: MLA J R Lobo held a meeting with the officers of horticulture department, women and child welfare department, during his visit to Kadri Park, here on Friday April 17.

The toy train that was functional in Kadri Park here in the past has gone out of order due to disuse. The technicians of Southern Railway (SR) after inspecting the toy train issued the report that it’s beyond repair. The state government through women and child welfare department released Rs 37 lac in this regard, while the train costs about Rs 45 lac. The efforts will be made to collect the balance amount locally, added MLA Lobo.

A unique entrance will be developed @ Rs 30 lac under MLA’s fund and the works in this regard begin at the earliest, said MLA Lobo.

Replying to the query of media persons on constructing Special Park for differently-abled children, MLA Lobo said it will be developed with the contributions of donors. Besides funds are being sought from civic body to develop the road from Circuit House to Kadri Park that will be developed like Pilikula Nisargadhama with proper parking facilities, said MLA Lobo.

MLA Lobo in his reply to media persons on the proposed musical fountain at old deer park said that it will be ready @ Rs 5 crore in 7 months.