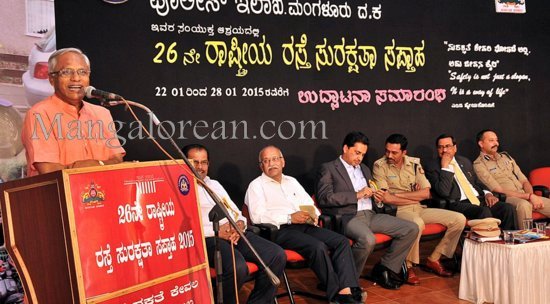 Mangaluru: Lesson on Traffic Rules should be added in School Curriculum – DC Ibrahim

Prior to the programme, a rally was held from the Light House hill Road which culminated at the Police community hall.

The programme began with an invocation. RTO Afzal Ahmed Khan welcomed the gathering. The ’26th National Road Safety Week – 2015′ was inaugurated by the CMD of Karnataka Bank S R Bansal by lighting the traditional lamp along with other dignitaries on the dais.

Addressing the gathering Bansal said that if everybody follows the traffic rules, there will be no accidents. “Children are disciplined and they are good in maintaining cleanliness. Children are the future of the country and tomorrows’ leaders.” He also urged the students to listen to their parents and follow the traffic rules.

Addressing the gathering Police commissioner Murugan said that in India the major cause of death is not cancer, diabetes or any other disease but most of the people die due to accidents. “In our day-to-day life, we hear about accidents, casualties, deaths and insurance. We need to change our life style by strictly following the traffic rules. Increase in road accidents is a serious issue and we need to think over it. Every citizen should know his/her duty while walking or driving on the road.”

He further said that in other countries people while driving think of others and follow traffic rules, stopping their vehicles while pedestrians cross the road. “We need to follow the same traffic rules strictly and not violate by over-speeding or overtaking other vehicles unnecessarily. In our country, we need to bring changes in the traffic law. The district administration should join hands with institutions and bring awareness about the traffic rules. We have to erect hoardings in public places on traffic rules. While registering cases or enforcing the law strictly is only a temporary solution, we need to make the public understand the importance of following traffic rules. In the coming days, we have to make Mangaluru a safe city. Conducting such road safety programmes will help bring awareness among the public.”

Speaking on the occasion DC Ibrahim said that the public should attend such programmes. He further said, “In Mangaluru, the roads are very narrow and we have many big cars in our city. The number of vehicles have also increased in the city and traffic violation is high. We need to make it a habit to follow traffic rules strictly. It is our duty to bring awareness among the students and the youth. If we can add a lesson on traffic rules in the school curriculum, it will be an added advantage for the students. From the district administration, we will send a proposal to add a lesson on traffic rules in the curriculum.”

He further said that there is competition between the KSRTC and city buses and before the passenger boards the bus the conductor blows the whistle. They do not even have any concern of the elderly people boarding the bus, so most of the elderly people find it difficult to travel by bus. We need to focus more on such issues and try to solve them.

MLA J R Lobo in his presidential address said that the road safety week should be organized with training workshops. In urban areas there are more vehicles and various problems. We need to solve the technical problems first. If there are proper footpaths students and public will utilize the footpath. There is shortage of staff in traffic department to handle traffic problems. We need to appoint volunteers to control the traffic during peak hours. There are humps on the roads but no reflectors, no marking or warning signs which cause accidents. There should be strict enforcement of law because in other countries the traffic laws are very strict. In our country drivers do not follow lane discipline. Lack of punishment causes more accidents. If a person violates the traffic rules, his/her license should be cancelled. As Dc Ibrahim suggested, there should be a lesson on traffic rules in the school curriculum. While concluding he said that we need to join hands to solve the traffic problems in the city.