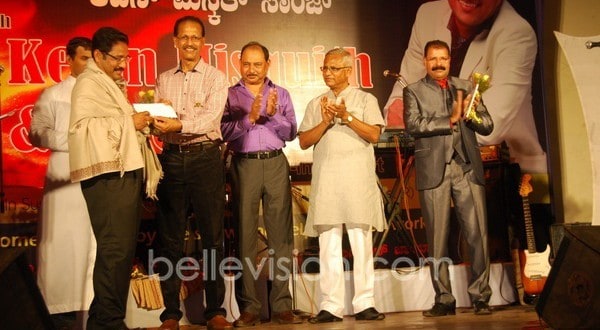 Kevin started his thirtieth Nite with a solo song. The show featured old as well as new compositions of Kevin Misquith with the band Milestone scoring the pleasing music. The singers and musicians included Jackson Noronha, Clyde Lobo, Ashwin Sequeira, Rikith Soans, Royston Pinto and Ian Sachin from the regular group with the addition of Clement Fernandes and Munita Veigas.

Pokri Kalakars’ with the performance by Blazie Monteiro and Floyd D’Mello performed comedy acts to send the crowd into laughter during the intervals.

The dance sensation Gavin Rodrigues and his Silver Steppers added glitz to the evening with their scintillating dance numbers.

A brief stage programme was held to felicitate the main sponsors and for the launch of a book published by J J Publications.

Jerry Rodrigues, proprietor of J J Publications was present during the release of the book. The book is a collection of tips of health and beauty. The book also includes chapters on pregnancy care and childcare.

Mangaluru MLA J R Lobo congratulated Kevin for his special achievement of reaching the thirtieth milestone while he was still very young. ‘I am sure that you will break many records before you turn 50,’ said MLA Lobo.

MLA Lobo also praised Stephen Quadras for his social work and remembered the days in social service together at CODP.

Elias Sanctis, a philanthropist narrated a small story of Rabindranath Tagore and said, ‘I appreciate Kevin’s talent which he is sharing with others by entertaining them.’

Pascal B Pinto, a well known social worker wished all the best to Kevin in his future endeavors.

Rosario parish priest Fr J B Crasta praised Kevin for his talents and said that he was happy to see the music show hosted at Rosario Cathedral hall.

The best moments of the show came in the form tributes to legends of Konkani who have departed. The whole team of the Nite in a mini concert presented few lines of best songs of the legends.

‘There are many stars in Konkani sky, but only one moon. And that is Wilfy Rebimbus,’ said Kevin paying tribute to Konkan Kogul Wilfy Rebimbus with emotions.