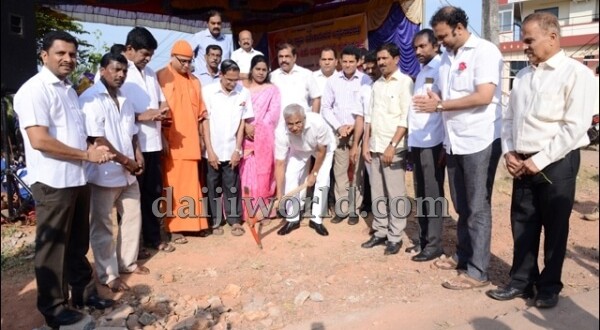 Mangaluru, Jan 12: MLA J R Lobo on Tuesday January 12 laid the foundation stone for a mini park at Bejai, on the occasion of the 153rd birth anniversary of Swami Vivekananda.

School children as well as dignitaries paid floral tribute to the portrait of Swami Vivekananda.
Addressing the gathering, J R Lobo said, “This is a good occasion as we are celebrating the 153rd birth anniversary of Swami Vivekananda, a great saint who bought recognition and pride to our nation internationally. His concern over guiding youngsters in the right path is commendable. Children should read about his life history and try to inculcate his values and teachings. He was a great person who followed the essence of all religions and lived his life accordingly. He does not belong to any one particular community but he is a role model to all of us, irrespective of caste, religion or creed. I urge the local corporator and the city corporation to name this park as Swami Vivekananda park. I also thank Laxmish Bhandary of Bhandary Builders for contributing to develop this park.”

Dharmavrithananda Swamiji of Ramakrishna Mission said, “Every human being wishes to lead a good life. But he lives two types of life – one, external, that revolves around power and money; and two, internal, that is about love, affection and emotions. He portrays his personality in different ways on different occasions. It is not enough to be gentlemen externally, instead we should be gentlemen internally. We should be gentlemen by our thoughts and actions. No one can change a person, the change has to come from within. Swami Vivekananda said, ‘You are the creater of your destiny’, so let us try to be good people and good citizens of this nation.”