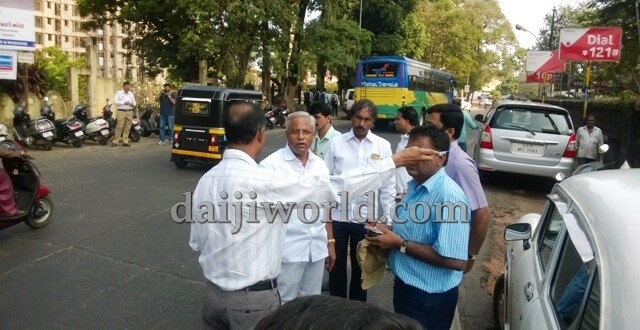 Mangaluru, Jan 8: Mangalore South MLA J R Lobo on Friday January 8 visited various areas in and around the city along with ACP traffic Uday Nayak, MCC commissioner H S Gopalkrishna and other MCC officials and directed the officials concerned to take necessary steps to ease the traffic in the city.

J R Lobo inspected major junctions of the city like Hampankatta, Jyothi, Dr Ambedkar circle and Nantoor junction. He instructed the officials to lay interlocks and provide as much parking facility as possible in the city and construct footpaths on busy roads so that it is easy for the pedestrians to walk and for easy movement of traffic. He also instructed the MCC officials to consult the traffic department and shift some bus stops.

Addressing media persons Lobo said, “We have taken up this drive to ease the traffic problem in the city. A team of MCC officials will inspect in and around the city once in 15 days and check the maintenance of the city roads and irregularities if any. The traffic department has placed a proposal for installing 42 speedbreakers to avoid accidents. The MCC along with the traffic department will take neccesary action in this regard. MCC will also shift a few bus stops on the instructions of the traffic department.

“Construction of footpaths will also be taken up and in this regard we have sent proposal to the state government. Some free lefts will be introduced in places like Ambedkar circle. The traffic department is celebrating ‘Traffic Week’ on January 18 at 10 am, in which all the officials from Mescom, BSNL, MCC, police and other departments will take part. It is an opportunity for people who are interested to give suggestions on how to improve the traffic conditions in the city. This is not a one day’s drive, it is a continuous process and will take at least 6 months for the situation to change,” he added.

“Work on the construction of the concrete road from Shivbhag to Nanthoor will be taken up shortly and dividers will also be installed. All this will help in easing the traffic in the city,” he said.

On being asked about the shortage of staff in the police department, he said, “There is shortage of staff in the police department but the traffic wardens have been really helpful. We tend to criticize, but people who can and are capable should try to serve as traffic wardens at least for one hour and thereby help in improving the traffic condition in the city.”