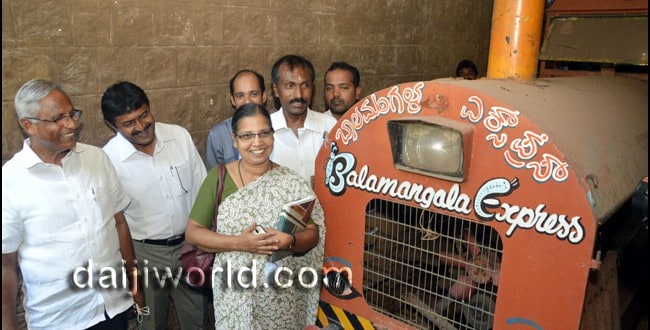 Mangaluru, Apr 17: MLA J R Lobo along with officials of the horticulture department and women and children welfare department inspected Kadri Park here on April 17 and revealed plans to develop the park further, including reinstallation of the toy train.

During the inspection he noted that greenery in the park has not been maintained and took the officials to task. He also asked the deputy director of the horticulture department to set right the park as soon as possible. Water problem has been solved but installation of sprinklers is not complete.

Speaking to reporters, J R Lobo said, “A few days back we laid the foundation stone for the musical fountain. The project has been taken up at a cost of Rs 5 crore and the amount has already been sanctioned by the state government.

“Moreover, the toy train will be reinstalled with the contribution of women and children welfare department. For this purpose Rs 37.54 lac has been sanctioned and within two to three months this work will be completed. I thank women and children welfare minister Umashree and chief secretary Rajneesh Goel for sanctioning the amount. I have already sanctioned Rs 30 lac from the MLA fund for the installation of a new entrance block and a gate,” he said.

“We are also planning to develop a park for the differently-abled, and for this purpose we have sought contributions from sponsors. In case we do not get any sponsor I will do it with the MLA fund,” he added.

Lobo gave strict instructions to the officials to maintain greenery in the park and concentrate on its maintenance, and to install sprinklers throughout out the park. He also directed the deputy director of women and child welfare department to organize a meeting with the zilla panchayat CEO to plan on how to develop the toy train.

J R Lobo will also seek funds from the MCC to develop the road from Circuit House to Kadri Park including footpath and parking facility. There are also plans to form a Kadri Park society so as to get more funds and develop it further on the lines of Pilikula Nisargadhama.