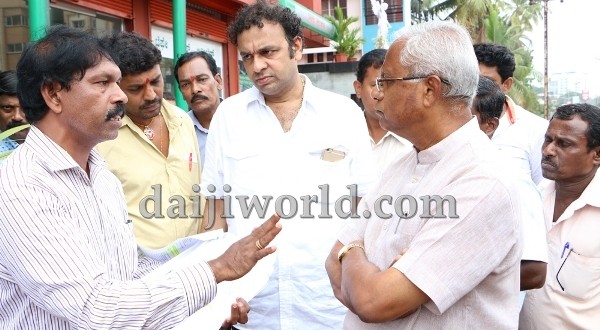 Mangaluru, May 15: Mangaluru South MLA J R Lobo on May 15 held a conciliatory meeting with the Hindustan Petroleum Company Limited (HPCL) officials and Prakash, the dealer who sat on dharna in front of HPCL office here alleging ‘discrimination’ and ‘unjust treatment’ by the company.

Briefing on the conciliation meeting, J R Lobo said, “It came to my notice that Prakash who runs a petrol pump in Mudigere has been done injustice by HPCL. A person named Dasharath has taken petroleum products of Rs 25 lacs on credit. But Prakash says he does not have any connection with Dashrath and he does not owe any amount to HPCL.

“Today when I visited the place where Prakash is sitting on dharna, he narrated his story, and after listening to the entire version, at the outset, it looks like some injustice has been done to Prakash. To resolve the issue, I called a conciliation meeting with HPCL. Since the family is bankrupt and is not in a position to pay the amount, I have suggested HPCL to give 8 KL diesel and 4 KL petrol on credit by taking all the necessary collateral, so that at least he can reopen the petrol pump. As they cannot take action on their own since they have some limitations, I have asked them to write to the higher officials by referring the proceedings of this meeting and my suggestion, so that this problem can be solved,” he said.

“I will write to the central vigilance commission to investigate the alleged cheating, so that action is taken against the guilty. The central government under the leadership of Rajiv Gandhi had given this SC/ST dealership scheme to the backward community and this should not be misused in any way. I have asked him to withdraw the dharna temporarily until HPCL’s higher officials take a decision.”