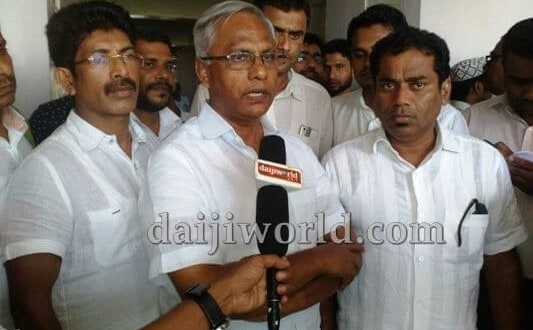 Mangaluru, Aug 25: MLA of Mangaluru South J R Lobo on Tuesday August 25 visited the victim of the immoral rowydism by a mob of right-wing activists at Attavar.

Shabbir (name changed) was on Monday August 24 stripped and assaulted after being tied to an electricy pole at Attavar by right-wing activists for being in the company of a female colleague belonging to another community. The girl in a press meet on Tuesday alleged that the mob had ‘rescued’ her and that Shabbir had ‘harassed’ her.

J R Lobo visited Shabbir in the hospital on Tuesday and enquired about his health. He said that police have been asked to take appropriate action against those who took law into their hands.

Condemning the incident, Lobo said that such acts not only bring bad name to Mangaluru, but also disrupt peace and harmony in the city.

“I am very saddened by this inhuman act. Dakshina Kannada is known as a district of educated and intellectual people, but some people are trying to spoil Mangaluru’s image by indulging in such deplorable acts. Strict action will be taken against the culprits, no matter which religion they belong to,” he said.