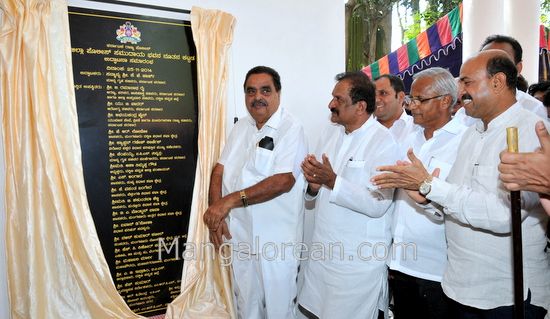 The programme began with an invocation. The commissioner of police R Hitendra welcomed the gathering. The programme was inaugurated by the Home minister K J George by lighting the traditional lamp along with other dignitaries on the dais.

Addressing the gathering HM George said that the police department is always working under pressure day and night to maintain law and order in the district, state and the country. The work of the policemen is very stressful which creates a number health issues for them. The state government led by chief minister Siddaramaiah has taken all the necessary measures for their betterment. In the entire state we have started canteens for the police where they can buy necessary things for lesser price. Since it is difficult even for the police officers to pay rent and organize programme or family functions, the MRPL has come forward and as part of their corporate responsibility built a community hall for the police department. The state government has also planned to build police community halls for policemen in every district. There are police community halls in Bengaluru and Mysuru. The state government has also planned to build quarters for the police.

He further said that every year more than 4000 police retire but there are no new appointments in the police department. When the Congress government came to power we found that 22,500 posts were vacant in the police department. We are in the process of appointing 8500 police. 790 sub inspectors have been appointed and 290 additional sub inspectors will be appointed. The reservation for women police has also increased to 20%. We need to train the candidates and the present facilities can train only 4500 candidates at a time. We need to start temporary training centres to train the other 4000 candidates.

The Naxal problem persists in the district since they are deprived of government schemes and are not getting jobs. For people who are in the forest area, we are giving them opportunity to join the police department. This year 11,500 new houses will be build for the police officers, already construction work of 2700 houses has been started and we have invited tenders for the rest of the houses, once the tender procedure is completed we will start the work within 2 months.

The Police who are providing us safety, if they fall sick they will not be able to perform their duty. All the police officers will be given Rs 1000 per year for their medical check-up. For quality education for the children, we will start public schools in every regional head quarters. The government will also provide basic facilities.

Minister George also said that if anyone violates the law they will be punished severely. Mangaloreans are well cultured and intellectual people and they have contributed to the world in various fields.