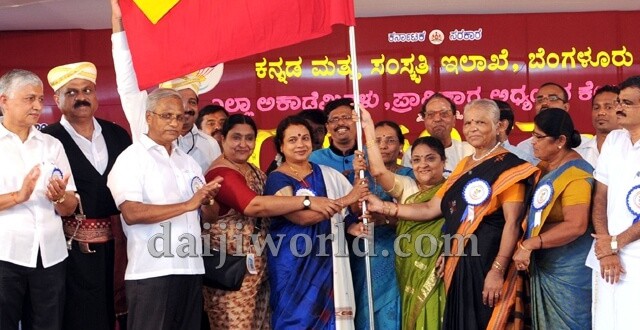 The event began with a traditonal and colourful procession from Mangalajyothi school to Pilikula. The procession included Siddavesha, ‘kalasa’, Kangil Nritya, tiger dance, Peacock dance, Yakshagana, Holi dance, martial stunts, duff, kolata and much more that depicted the culture of coastal region. As many as 16 academies of the state participated in the procession.

The formal function began with a prayer and state anthem by the students, after which Roy Castelino, president of Karnataka Konkani Sahitya Academy welcomed the guests and the gathering.

Addressing the gathering, Umashree said, “Sangama Sambhrama-2015 is an innovative cultural event, where Tulu, Konkani and Beary Sahitya Academies along with other academies of the state have come together to organize a cultural celebration. Kannada and culture department is supporting Tulu, Konkani and Beary Sahitya Academies in every way in their every initiative to organize cultural events and safeguard their traditions. The department has introduced Real Time Gross Settlement (RTGS) accounting system for the payment of artistes and given grants to more than 1,300 institutions.

“Efforts are made to reduce the rents of district Rang Mandirs, and RTGS will be extended to all state and district cultural programmes soon. For the development of Pilikula, Rs 4.98 crore has been sanctioned and Rs 1.89 crore has been released already. Rs 2 crore has been sanctioned to Karnataka Konkani Sahitya Academy for setting up Konkani study chair at Mangaluru university, Vishwa Konkani Kendra will recieve Rs 50 lac soon and the pending amount of Rs 80 lac for Tulu Bhavan will also be released soon,” she added

“Construction of Abbakka Bhavan was delayed due to land issues which have been cleared and work will resume soon. The CM has been giving full support to cultural development in the state, and I am greatful to him. I wish all the success to Sangama Sambhrama-2015,” she added.

In his inaugural address, MLA J R Lobo, who was also a former founder executive director of Pilikula project said, “The planning for Pilikula Nisargadhama was initiated 20 years ago, and a number of people have toiled for converting the barren land into green place which has number of trees, a lake, a zoo, ‘Guttina Mane’, golf course and plenty more aspects that have changed the face of this place. The state government funds have been utilized fully and never misused. Many more works have to be initiated and tender process is going on. After the completion of the pending work, the beauty of Pilikula will be doubled. The coastal area has numerous cultures and traditions, we have to spread our cultures to other states also. I wish all the success to the Sangama Sambhrama-2015.”

Umashree was honoured on the occasion.

B A Mohammed Haneef, president of Beary Sahitya Academy proposed the vote of thanks, while senior journalist Manohar Prasad compered the event.