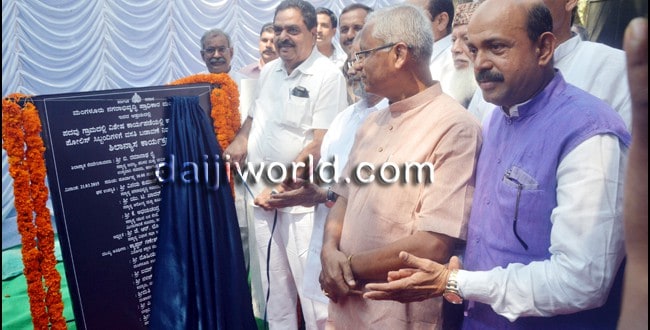 Mangaluru, Mar 21: The foundation stone for the musical fountain at old Deer Park in Kadri was laid on Saturday March 21.

Apart from the musical fountain, the park will also house new quarters for special police force.

Urban development minister Vinay Kumar Sorake and district incharge minister B Ramanath Rai laid the foundation for both the projects.

Addressing the gathering, Vinay Kumar Sorake said, “The state government is concentrating on improving tourism in Karnataka. Mangaluru is considered the second most important city in the state after Bengaluru. Tourism potential is high in this coastal region. We will make Mangaluru a tourist destination in the coming days.”

District incharge minister Ramanath Rai said, “In comparison to other cities, Mangaluru is short of parks and open space. Very soon two more parks will come up in Bantwal. We are giving importance to making Manglauru a beautiful and clean city.”

Lobo thanked the urban development minister for approving the proposal and sanctioning the fund swiftly for Kadri Park development society.

The project, with an estimated cost of Rs 4.97 crore, includes putting up fences and installation of 15 food stalls. By November this year, the project is expected to be completed.