Home » Manglorean » Mangaluru: Flats will be Provided to around 900 Homeless People in Kannur Within 2 years – MLA Lobo 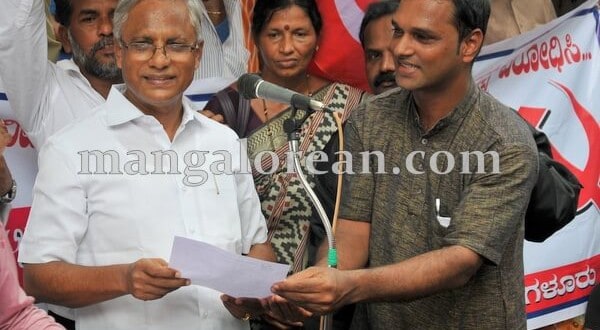 Image from post regarding Mangaluru: Flats will be Provided to around 900 Homeless People in Kannur Within 2 years – MLA Lobo

Mangaluru: Flats will be Provided to around 900 Homeless People in Kannur Within 2 years – MLA Lobo

Mangaluru: The activists of CPI(M) held a protest ‘Shasakara Kacheri Chalo’, in front of MLA J R Lobo’s office here, on June 22. Prior to the protest, a procession was held from Nanthur which culminate in front of the MLA’S office.

Addressing the protesters, Sunil Kumar Bajal said that there are more than 1,500 people who are homeless in the Mangalore City Corporation limits. “Many people have applied several times for housing but they did not get homes so far. Meetings were held under the leadership of the Deputy Commissioner and MLAs but without any results. MLA Lobo has assured to provide houses under ‘Ashraya Yojana’ but so far nothing has been done. We are depending on Lobo’s assurance and we demand that shelter be provided to the homeless as soon as possible.”

Addressing the protesters, MLA J R Lobo said, “In 2003, when I was the Commissioner of MCC, people were facing the same problem. They had protested for the provision of shelter before I took up the position of the Commissioner. I took the initiative and started to search for land. At that time, there was no problem of land in Mangalore. I acquired the ‘kumki’ land in Shaktinagar and built 500 houses; today, that colony is known as Rajiv Nagar. I am very happy that during my tenure as the Commissioner, I could build houses and distribute them to the poor.”

“We are planning to build houses for the poor under the Slum Development Board. The people of Kannagudde and Shaktinagar had built houses without any land rights, but after I became the MLA, I took the initiative and distributed the land rights documents to them.”

He further said that after coming to power, his aim is to distribute shelters to the poor people. “If we provide shelters to the poor people, God will bless us. In Kannur, there is 11 acres of land and this matter was in the court. We have contested the case and acquired the land. Now, we have 11 acres of land in our hands, but we cannot fulfill the demands of all the 1,500 people. We have decided to build a low cost flat system and the plans for it are also ready. We have also consulted with the ‘Nirmithi Kendra’ in Bengaluru and they have asked the officials of the Mangaluru Nirmithi Kendra to come to Bengaluru to discuss about building flats in Kannur.”

He also said that under the Ashraya Yojana, the original plan was to build houses. “But since we cannot provide houses to all the 1,500 applicants in the 11 acres of land, we decided to build apartments with one bedroom, hall, kitchen and bathroom/toilet. In the beginning, we will build 500 to 900 flats. We will try to provide houses to the people, who are homeless. Those who have not yet applied for the houses, should apply in the Mangalore City Corporation. The applications of those who have already applied will be processed soon. MCC officials will send notices to the applicants to provide necessary documents. Under the Ashraya Yojana, the government will provide Rs 1.2 lakh and the corporation will provide Rs 40,000. At least, Rs 3 lakh is required to build one flat. So, for the remaining amount, the people should take loan from the bank.”

He also said that all the applicants will not be provided houses. “Those who are eligible will be given notice. Within 20 days, all the applications will be processed and the eligible applicants will be provided houses. It will take atleast 2 years to complete the project. Since we do not have more land to build houses and find it difficult to provide independent houses. So we are planning to build flats.”

Sunil Kumar Bajal handed over a memorandum to J R Lobo and said that those who have not applied for houses should be given chance to apply. He also said that the Niveshana Rahita Horata Samiti should also be taken into confidence by the Ashraya Yojana Committee before taking the decision of building houses so that they can provide suggestions while building the colonies.