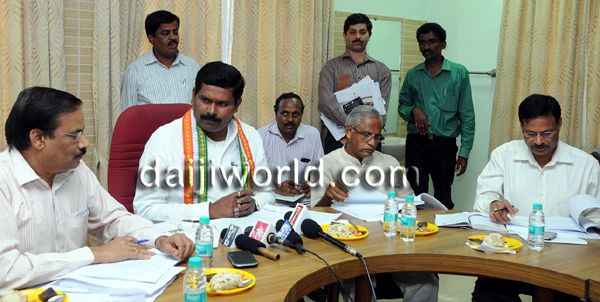 Image from Post Regarding Fibre-reinforced plastic to be installed in vented dams: Minister

Mangaluru: Fibre-reinforced plastic to be installed in vented dams: Minister

Mangaluru, Dec 3: “The minor irrigation department of Karnataka has planned to install Fibre-reinforced plastic (FRP) in vented dams in Dakshina Kannada, Udupi and Karwar. It will be first installed in the Senapur vented dam in Udupi on pilot basis,” said state minister for minor irrigation, Shivaraj Tangadagi.

Addressing press persons at Circuit House here on Wednesday December 3, he said that the government has sanctioned Rs 12 crore for the project and that the tender process will commence soon. He also informed that works pertaining to the Senapur project will conclude by March.

“The FRP comes as an alternative to the traditional method where flow of water is stopped by placing planks to the vented dams. Once installed, FRPs operate automatically, thus negating the need of manpower. As there are 87 vents in Senapur, FRP will certainly help in cutting down the required manpower,” he added.

“If the pilot project becomes successful, similar projects will be undertaken in other parts of the state as well,” he said.
Shivaraj said that electrical items in borewells will be replaced by solar panels to pump water for agricultural activities.
“As many as 1,845 borewells are already equipped with solar panels. The initiative has been launched under the tribal welfare and special divisional schemes. This facility will be extended to DK next year,” he informed.

Lake Development Authority
Shivaraj said that the Lake Development Authority will soon come into existence, of which he will be the president. “Through the authority, a campaign to vacate lake encroachers will be launched in January. The authority will focus mainly on South Karnataka. A total of 26,853 lakes exist in the state out of which 3, 579 are classified under the minor irrigation department. A total of 1,973 lakes are in the southern zone”, he said.

“One lake per Assembly constituency will be considered for development. Hence six lakes in DK will be entitled under the project,” he added.

Mangaluru South MLA J R Lobo and officials were present at the press meet.
Earlier in the evening, he visited the district Congress office and said that he was on a tour of the coastal region as per the instructions of the chief minister that every minister must visit the districts to learn and experience the ground reality and respond to the problems of the people.

He further said that it was wrong on the part of the union government to dilute the NREGA, as it was successful in the coastal region. “Discussion should be held on NREGA, and it should not be scraped,” he said.
T K Sudhir, Vijaykumar Shetty, Kripa Alva and others were present.