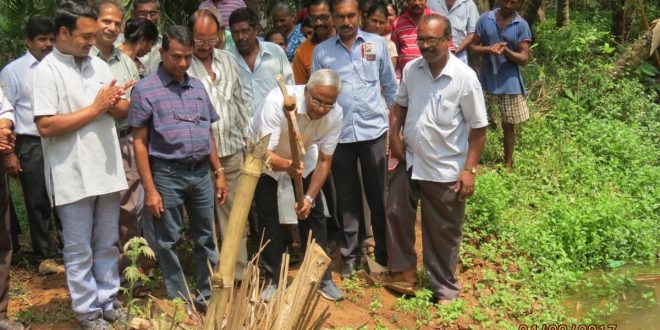 Mangaluru, 07 Apr 2017: Eight lakes located in and around Mangaluru city will be rejuvenated at a cost of Rs 4 crore according to a project launched by Karnataka State Minor Irrigation Department, said MLA J R Lobo during the Guddali Pooja function held as an initial step for the project in the city on Friday.

Speaking on the present condition of lakes in Karnataka, the MLA noted that exploitation of natural resources, lack of interest in valuable water sources including ponds, lakes and wells have caused them to dry up throughout the state including in Tulu Nadu. According to the proposed project, lakes in the city will be developed for water storage which would help in raising ground water level and also utilizing it for other purposes, he said.

As the first step of the proposed project, areas of the lake should be identified with their borders and if any part of the lake was found to be encroached upon, concerned authorities had to evict the intruders immediately, J R Lobo directed the officials. He also cautioned them regarding polluted water entering lakes.

As per the proposed project, some of the lakes that will be rejuvenated are Byradi, Gujjarakere, Kambalakere, Kembarkere and Doctors’ colony kere.