Home » Daijiworld » Mangaluru: Dissent against MCC commissioner comes to the fore at meeting 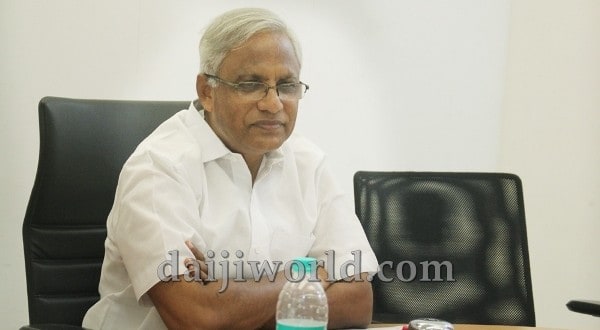 Image from post regarding Mangaluru: Dissent against MCC commissioner comes to the fore at meeting

Mangaluru: Dissent against MCC commissioner comes to the fore at meeting

Mangaluru, Apr 25: The growing dissent among Mangaluru city corporators against MCC commissioner Hephsiba Rani Korlapati came to the fore at the MCC review meeting chaired by MLA J R Lobo here on Saturday April 25.
In an heated exchange of words, the MCC commissioner and the corporators accused each other of not working properly. It may be recalled that when chief minister Siddaramaiah had visited the city on Friday April 24, a few of the corporators had a private meeting with him and reportedly urged him to transfer the commissioner.
Korlapati said that the corporators and officials do not listen to her and complain whenever she calls them for some work. “I am the only one person working, I cannot go everywhere and cannot do everything,” she said.
MLA J R Lobo intervened and told her not to take all the burden on herself and assign jobs to other officials.
The corporators then took the example of J R Lobo and spoke about how efficiently he had worked when he was MCC commissioner. However, the comparison with J R Lobo seemed to have offended Korlapati.
Former mayor Shashidhar Hegde said, “We (corporators) are answerable to the people. When anything goes wrong, the people ask us and not you (Korlapati). Corporators have to take appointment even to meet you. We are not asking you to do anything illegal, but only do the work expected of the MCC commissioner.”
MLA Lobo tried to control the situation while advising the commissioner, “You have to grow. These issues are common. We are like a family here and we have to work together.”
It is also learnt that the commissioner sent a notice to an attended for allowing a corporator to meet her without prior appointment.
Speaking to daijiworld, Shashidhar Hegde said, “Some days ago, a corporator had gone to meet the commissioner without appointment, after which she issued a notice to the attender for allowing the corporator to enter.
“If a corporator is not allowed to meet her, then what about the general public? This is a place for the common people. She does not understand how the corporation works. There is so much work but nothing is getting done,” Hegde said.
As the situation grew worse, Lobo sent everyone including the media outside and held a meeting with the MCC commissioner.
Responding to the issue, Hephsiba Korlapati told daijiworld, “Ever since I took charge four months ago, I have been trying to put the right system in place in MCC. I had given clear instructions to the attender not to allow anyone when important meetings or discussions are going on. But he still did it not just once or twice but three times, despite repeated warnings. When he did it the fourth time, I issued him notice. He could have first informed me about whoever has come to meet, instead of letting them barge in.”
Regarding corporators’ dissatisfaction about her work, she said, “People expect speedy delivery of various development works. But I am not getting the necessary cooperation from officials in carrying out my work. They are not delivering results at the expected pace, hence I am dissatisfied with them. I have nothing personal against anyone.”

Review Meet
Earlier, MLA JR Lobo conducted a review meet on various development programmes and ongoing projects in the presence of MCC officials.
Property valuation was discussed in the meeting. President of CREDAI D B Mehta said that roads are not classified, and the prices of properties on the main roads are same as those in interior roads. “This is injustice to everyone associated with properties,” he said.

In response, the MLA directed the officials to identify lanes and bylanes and also asked them to give a detailed report on the matter in the next meeting.
There were complaints that the property rate list presently in force at the sub register office is not proper. Lobo suggested that the said list should be properly studied and reviewed scientifically.
Lobo revealed that the proceeding of the meeting itself would be recorded as a complaint and a request will be made to the government for the review of the property rates.

The previous review on the property valuation rates of Dakshina Kannada district sub register (Mangaluru city) office was done by a subcommittee.
The issue of naming of unnamed roads was also raised in the meeting. Lobo said that the officials and the corporators concerned should study the matter and name the roads by May 31.
The MLA also asked the officials for a progress report of markets at Bejai, Kaikamba, Alake, Kankanady, Kadri and the Central Market. A presentation was given on three major markets – Central Market, Mallikatte market and Kankanady market. These markets will be upgraded and include basement parking facility and all others amenities, he said.
The proposed bus stand project at Pumpwell was also discussed. J R Lobo directed the officials to make a development cell and submit a proposal on the bus stand so that he could present it to the chief minister for funds.
He also asked the officials to gear up for the monsoons ahead and respond to people’s needs. He directed them to keep a team of skilled labourers on standby and ensure that the drains are cleaned before the rainy season begins. “It is very important to respond immediately when people call for assistance during natural calamities. I urge all of you to look at people’s problems on humanitarian grounds and respond without any delay,” he told the officials.
MLA asked the officials why completion certificates were not given to people who had completed their houses without violating rules, and directed them to clear all the pending completion certificates.
Corporators, mayor Jacintha Alfred, deputy mayor Purushotham Chitrapur, tahsildar Mohan Rai and others were present at the meeting.