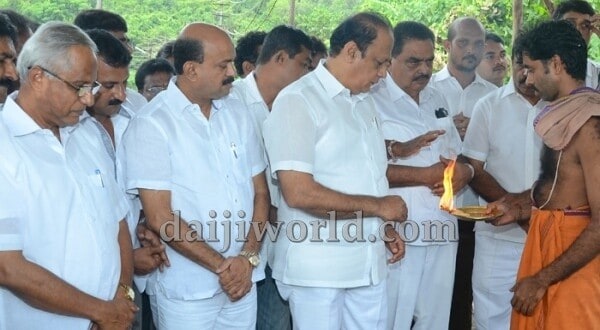 The seven roads are: Konchady to Kavoor (690 mt) at Rs 2 crore; Pachanady main road (510 mt) at a cost of of Rs 1.5 crore; Malady court road (800 mt) at Rs 2 crore; Ladyhill circle to Koragajja Gudi (365 mt) at Rs 1.90 crore; Durga Mahal to Bokkapatna Church (600 mt) at Rs 1.65 crore; Subhashnagar to Mangaladevi Temple (1,500 mt) at Rs 4.65 crore including footpath; and Kadri main entrance to Kadri Temple (105 mt) at Rs 1 crore including footpath.
After laying the foundation stones, Vinay Kumar Sorake addresed the media at Circuit House and said, “The initiative has taken to concrete seven roads in the city. Out of the seven, two road works are under II phase of urban development programme, four under III phase of urban development programme and one under the 13th Finance Commission programme.”

He further said, “The union government has launched new programmes like Smart City, urban development and housing scheme. We have included Mangaluru City Corporation under Atal Mission for Rejuvenation and Urban Transformation (AMRUT) Scheme, in which the union government and the state government will each provide Rs 100 crore.

“Towns which have population of above 1 lac will be included in Amrut Scheme. In Karnataka we have included 25 towns under this scheme. The state government has issued notice to prepare DPR immediately,” he added.
On the Smart City project, the minister said, “The union government has already issued guidelines on Smart Cities and given a list of criteria like availability of 24×7 water supply, solid waste management, E-governance etc. As per the criteria, we have to send a proposal to the union government. In Karnataka we are examining 11 city corporations for this. Karnataka has been allotted six Smart Cities, so we will be selecting them out of the 11 corporations as per guidelines. The union government will provide Rs 500 crore in five years and the state government also will provide the same amount during the same time.”

On the housing scheme he said, “A new programme has been proposed by the union government wherein it will provide a subsidy of Rs 2 lac for housing. In addition, Rs 1.20 lac will be given under the state’s Basavajayanthi scheme and there is provision of taking a loan of Rs 2 lac, and if the beneficiary invests Rs 80,000, he/she can get a flat costing Rs 6 lac under the special housing scheme. We are planning to implement this scheme, and it will be helpful for middle class families.”

On amendment to Section 94 CC of the Karnataka Land Revenue Act 1964 for regularisation of unauthorized land, he said, “The revenue department has taken the signature from the governor and framed rules and we will implement it. Those who live on government sites will be provided title deeds.”

He also said that the state cabinet has given its nod for upgradation of Urwa market. “The DPR for the ADB scheme has been prepared. The second phase of ADB programme will be implemented soon after the first one,” he said. He further said that as there is a scarcity of A, B and C category workers, the KPSC has started the process of appointing them, and that D category workers have to be appointed by the deputy commissioner.

“We are also appointing an IAS officer as commissioner under the urban development authority to monitor the works at the state level. This process in progress. We are also in the process to appoint separate commissionerates for 11 city corporation to avoid delay in development works. This will be done within two months,” he added. On the appointment of new commissioner to Mangaluru City Corportation, he said the process of appointment has already started. “A KAS officer will be appointed as the MCC commissioner within a week,” he said.
District incharge minister B Ramanath Rai said that the Town Hall renovation work be completed by end of October this year.